At Space Center Houston you feel like you’re seeing a movie set featuring NASA and space exploration… except that’s ALL REAL!

Generally when you mention NASA many people imagine one single large HQ controlling all the American space program. But did you know that NASA actually has 18 centers and facilities in the United States?

One of the most important is located in Houston, Texas. Just remember the movie Apollo 13 and that sentence Tom Hanks made worldwide famous: “Houston, we have a problem”. Yes, he was referring to the folks in this control center.

This space center in Houston is called Johnson Space Center. Best of all: you can visit it. The visitor’s center is Space Center Houston, a nonprofit foundation which attracts 1 million people every year.

Since I moved to Texas this was one of the places I most wanted to tour. We had originally planned to spend just a few hours, but everything was so interesting that we ended up staying basically for the whole day.

In this post, you can find a summary of what most called my attention in addition to some tips to help you better enjoy the tour. 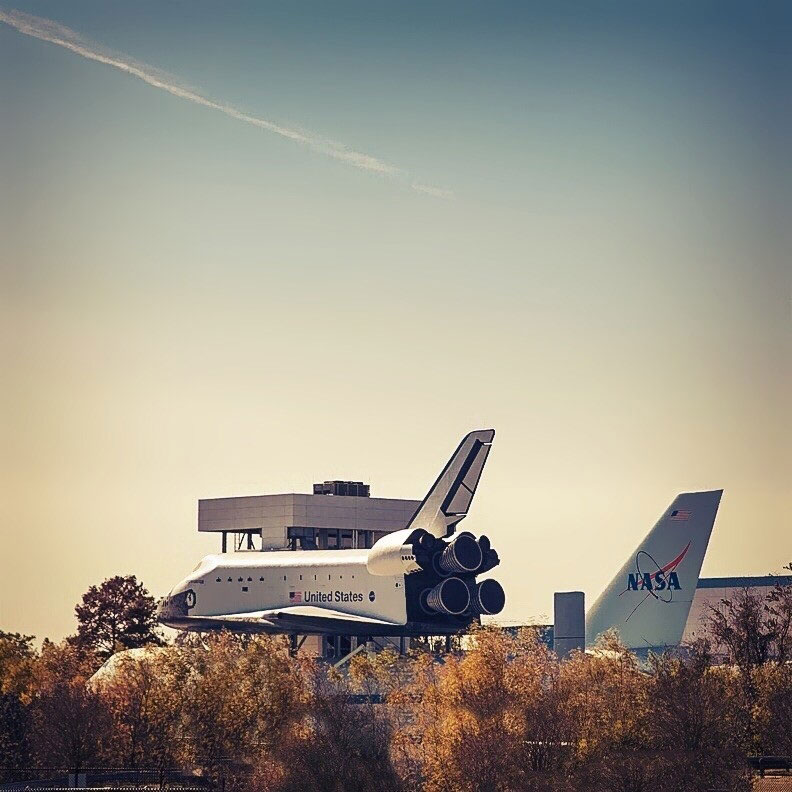 When I saw on their website a number of attractions, my biggest concern was how to get started and how should I plan the day. Let me explain: lots of attractions occur at scheduled times, and during high season there can be a huge queue to board the tram to Johnson Space Center (NASA itself).

It’s possible to book the tram tour online, but I had no idea when it would be a good time. Luckily I visited on a rare day of extreme cold in Houston when temperatures were close to freezing (yes, this can happen from one day to the next in Texas as I showed in this vlog of my first day in Houston, especially between November and March). I guess the cold might have scared a few people, and despite the place being busy, I didn’t wait more than 10-15 minutes in the lines.

I suggest you arrive as soon as they open, at 9:00 or 10:00 AM depending on the day of the week (not so crowded) and go for the tram tour in the end of the morning or around noon. This way you will have some time to see a few areas (or at least the basic) before jumping to the most famous attractions. Another reason is that the tram is open on both sides, so depending on weather conditions the tours may be canceled. Imagine if you save the best for last and miss the chance? It happened to a friend. 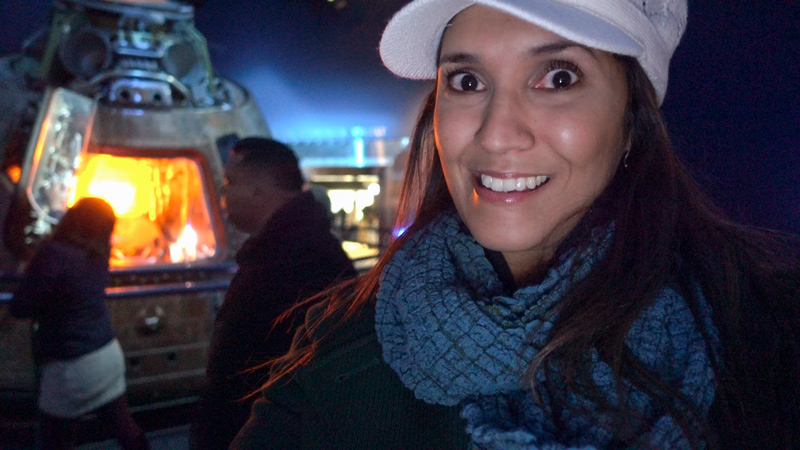 As soon as we arrived we headed directly to an area called Starship Gallery, where you can learn the history of the American space program, and even see the famous Mercury, Gemini and Apollo 17 space capsules. THE REAL ONES! Amazing how tiny they are! Astronauts used to be so tight is the same position for the whole trip! 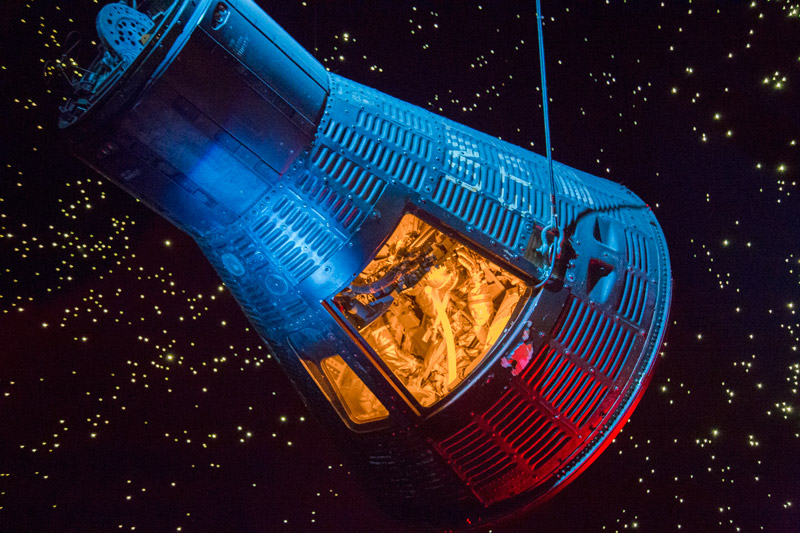 One of the real space capsules in display

There you can also see the Skylab, where astronauts used to train before starting their shifts in space, and real moon rocks! You can even touch one! 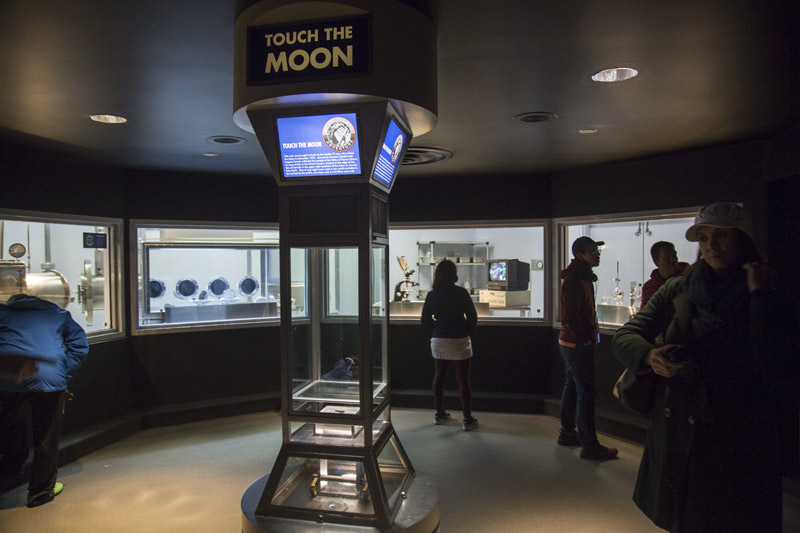 The little piece of the Moon is right there for anyone to touch!

At first, we quickly went through this area so that we could arrive at the Independence Plaza, which tends to be crowded too. We returned later in the day to finish taking pictures and shooting the video. This was one of my favorite parts, and it’s worth it to spend some time reading all the information.

This is one of the newest attractions at Space Center Houston. After the visit I learned that it’s also possible to book the exact time for your visit, avoiding queues. The day we went it was not necessary. Advantages of the low season! Hehehe 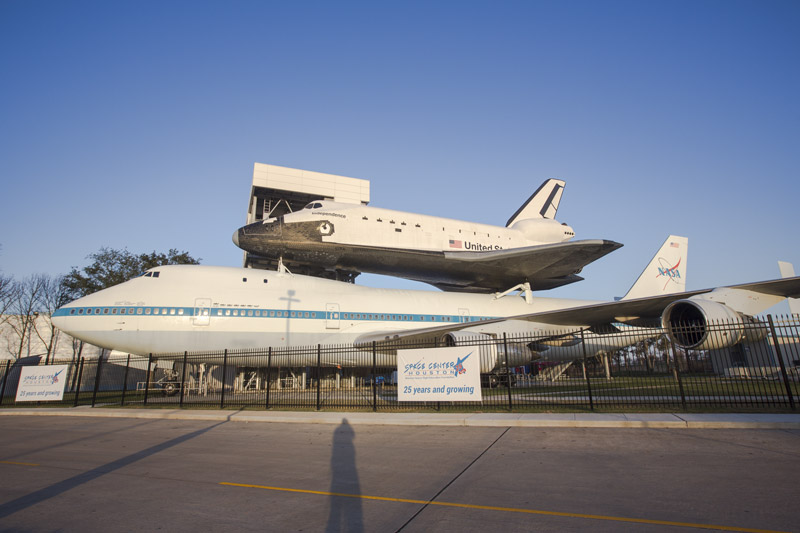 The main attraction here is the Boeing 747 that for 42 years was utilized 223 times to transport space shuttles. It’s called “shuttle carrier aircraft”. That’s why you see one aircraft on top of the other. The real one is on the bottom (there are only 2 of these). The one on top is a high-fidelity space shuttle replica, named Independence. You can get inside both.

Inside the space shuttle replica Independence at Space Center Houston

If you don’t book the tour online, visit the timed ticket station near the entrance, where you can book same-day tours. That’s what we did. But when it was time for the tour I discovered that that day the tour was divided in 2: one going to the workplace of scientists and engineers and another to the historical control center. As queues were small, we did both (1 hour each). And I advise you to do the same.

In the workplace tour, you see people working on computers and testing prototypes of new space tools. During our visit, the huge facility was even kind of empty. It was the week before Christmas and many people had probably already traveled to spend the holidays with their families.

The historic tour takes you to the old control center – the one from “Houston, we have a problem”. I loved it!!!! 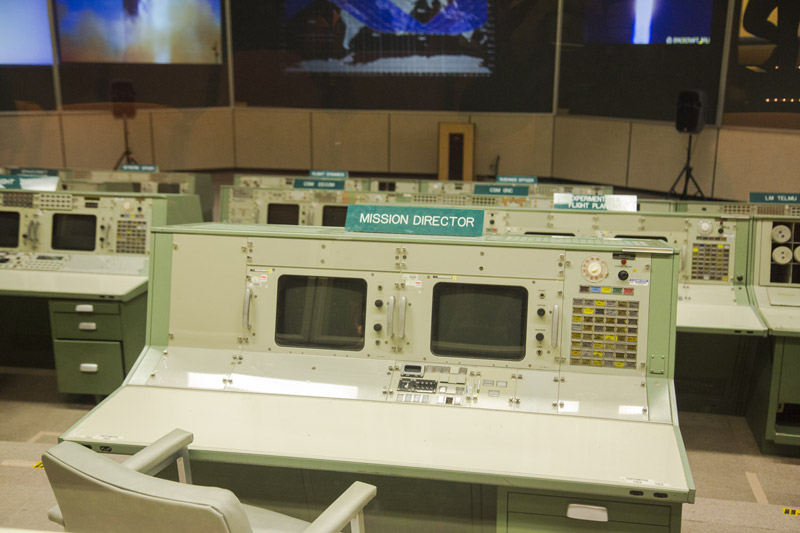 Historic Mission Control during the Apollo program at NASA

Both end up in the giant installation where the Saturn V rocket is stored. This is the tallest, heaviest, and most powerful rocket to ever operate, which supported the Apollo program for exploration of the moon. Its size is really impressive! 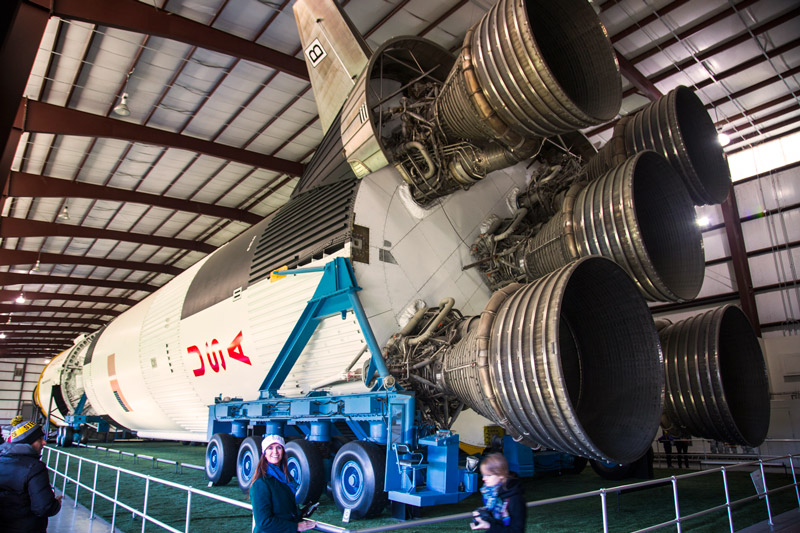 Outside you also see 2 smaller real rockets. If you don’t want to see this area again at the end of the second tour you can simply board the next tram back to the visitor’s center. 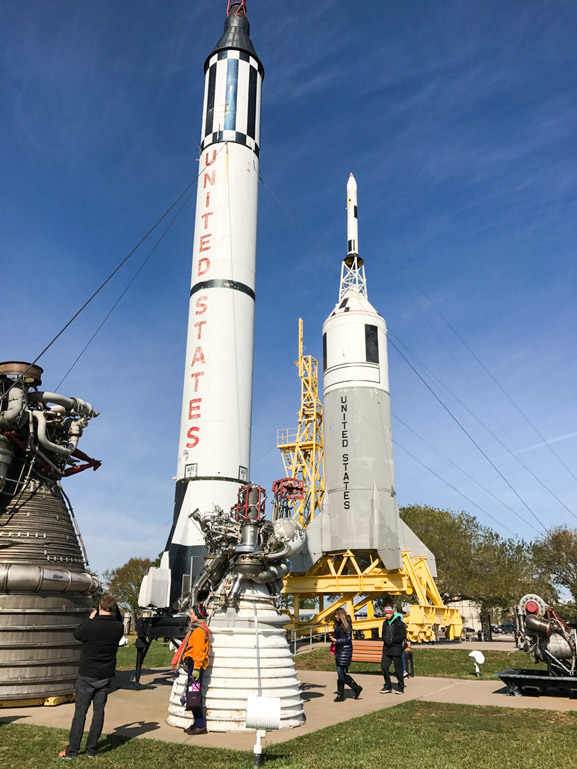 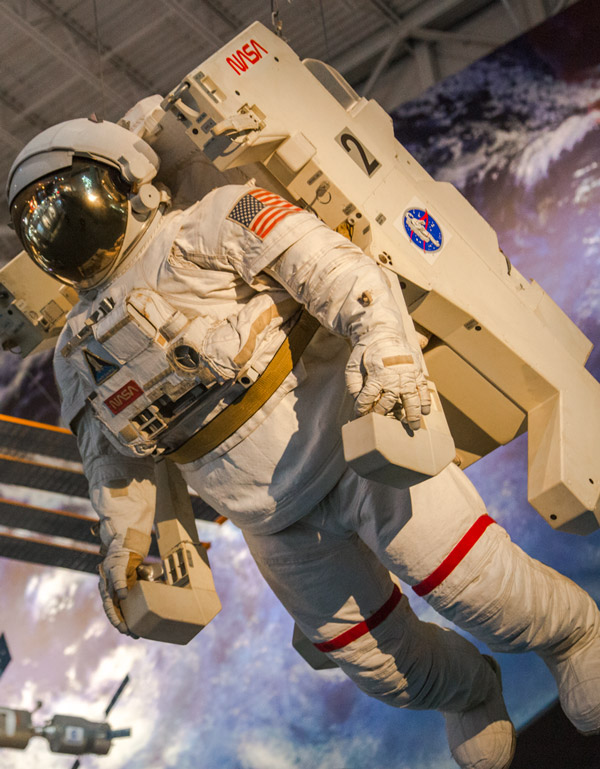 Presentations occur on a schedule, so I suggest you start making plans as soon as you arrive. Most are in the afternoon, another reason we planned our day the way I mentioned earlier.

The themes are the most varied: from current researches to practical demonstrations about life in space and the effects of lack of gravity. Everything very interesting. 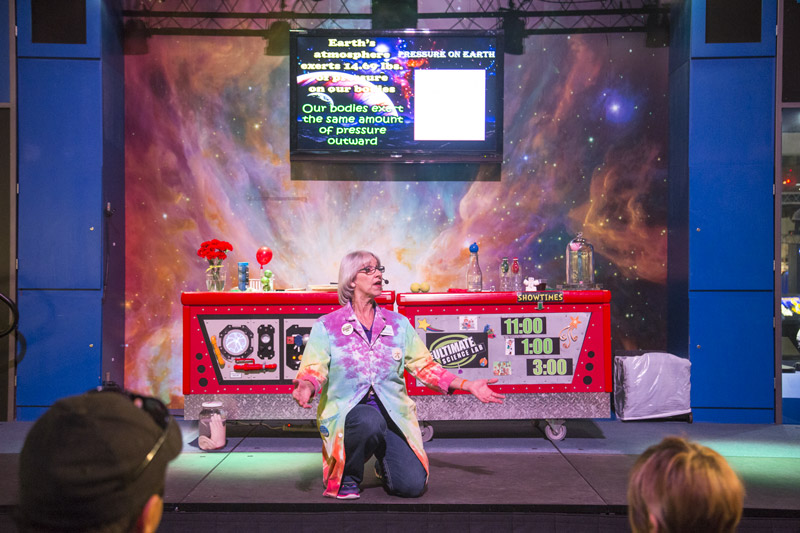 In between one and another, take the time to see the exhibitions in the Main Plaza (the newly inaugurated is about Mars), where you also find simulators.

Before visiting the Space Center Houston I had a vague idea about the space missions and didn’t know much about what’s currently going on. As I imagine many people might be in the same situation, I’ll summarize what I learned.

In the 60s and 70s, during the Cold War, the USA and the USSR were in a fierce space race to see who would dominate space exploration. The USSR scored first by sending the first man to space in 1961. The USA was soon able to match it, then went beyond by sending men to the moon in 1969.

There were several missions in between these two and also in the following years, until the day when USA and USSR went from competitors to allies. First in one single program in 1975, then the partnership continued with Russia after the end of the USSR. Today both work together at the International Space Station, which is basically a permanent lab in space where astronauts come and go, running researches and scientific experiments. Canada, Japan, and the European Space Agency (representing 22 countries) are also part of it. 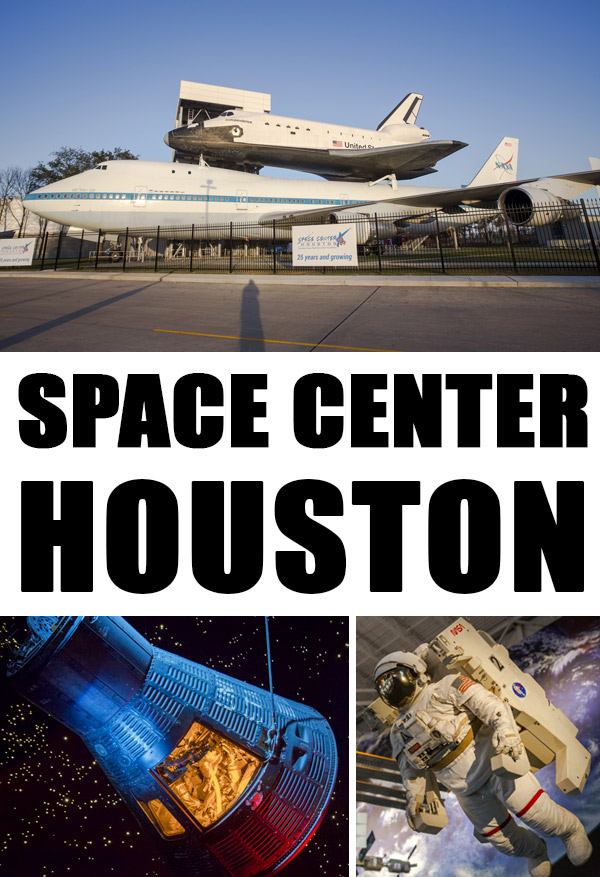 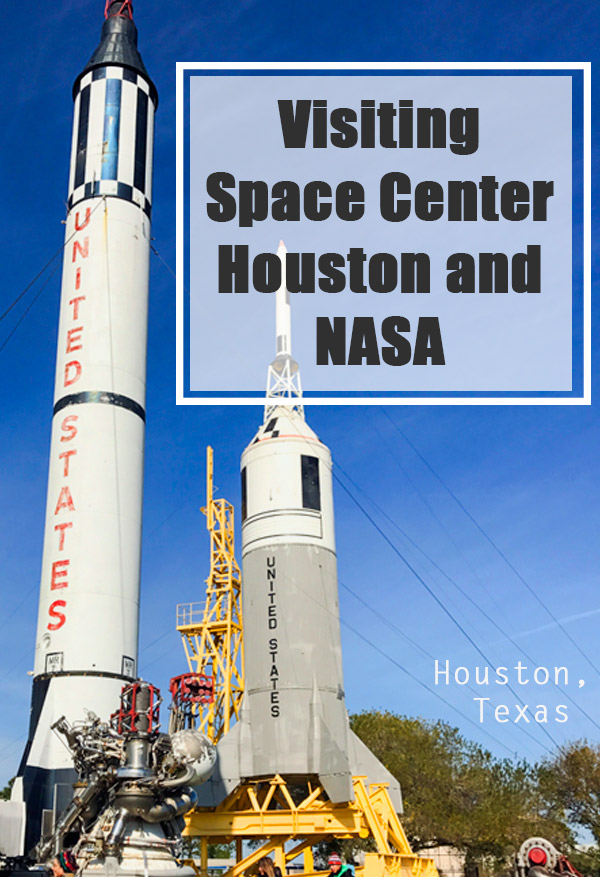 P.S.: As members of the media, our coverage was coordinated with the organization. I had total editorial freedom and even returned after this trip for another visit ?

✔️ Check out what other travelers are saying on TripAdvisor about Space Center Houston ?