The San Antonio Rodeo alone is well worth a road trip in February to San Antonio, Texas. This rodeo has won since 2005 the “Large Indoor Rodeo of the Year” award.

SAN ANTONIO, TEXAS, USA
San Antonio is the second largest city in Texas, only behind Houston (and ahead of Dallas)

Attending livestock exhibitions and rodeos is something that reminds me of my childhood. The fun in the carnival, seeing so many animals, the typical food… Yummy! And things, of course, got better as I grew up. Instead of only spending the day, I’d also stay for the evening, now really enjoying the rodeo itself and the concerts.

After moving to Texas I realized how the western tradition here remains strong even after centuries. And I find it awesome that to this day you can still see a few cowboys in the streets, especially in smaller towns.

But at the San Antonio Rodeo we all feel like wearing our hats. 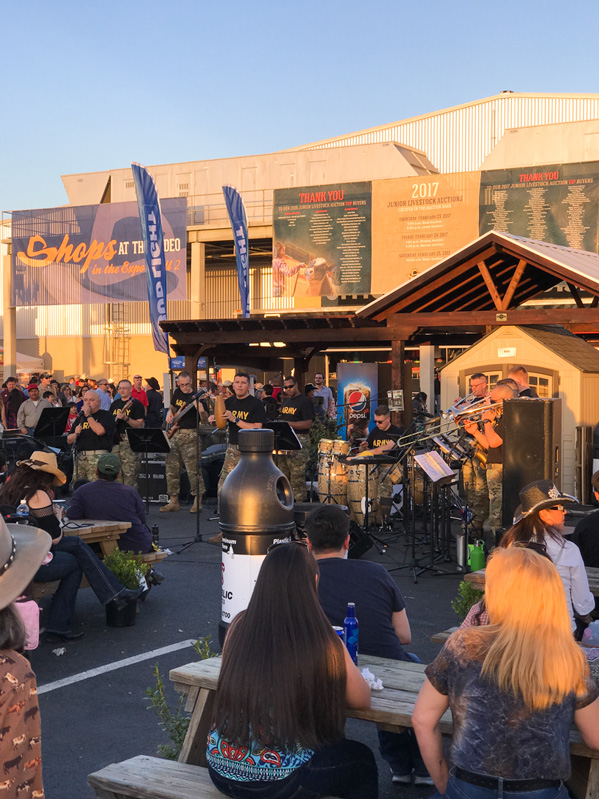 What makes the San Antonio Rodeo so unique?

They are not just a group of people meeting once a year to put together an event. They are a non-profit organization with a real mission to educate the youth by giving scholarships, grants, etc. so that kids can pursue their studies in agriculture related areas. More than 100 colleges and universities have their scholars, and the investment has surpassed $171 million since 1949!

To keep the effort going, they count on volunteers running fundraisers all year round. During the Rodeo itself, more than 6,000 volunteers organized into 40 committees help to make it all happen.

Studies indicate that they contribute with more than $250 million in impact on the local economy during the main event alone. That’s because several people come from outside the greater San Antonio area. At their last count, they had representatives from every U.S. state and from 95 countries, totaling more than 2 million visitors!

Apart from the sustainable impact, let me also tell you about my personal experience.

My own experience at the San Antonio Rodeo

We arrived late afternoon and stayed until the end of the show, close to 11.00 PM.

We had a dinner reservation at the Terrace Club at 6.30 PM, exactly 1 hour before the show. So we ended up with a little more than 1 hour to explore the grounds before getting in, which was not a lot of time.

There are so many fun attractions like the Wildlife Expo, the carnival, or even the shopping area. Unfortunately, you can’t see everything in such a short amount of time.

So make sure you arrive earlier or, if you have the chance, go back in a different day. This would be even better, as you won’t get tired of walking. Yes, you inevitably have to walk long distances. Everything is very big and some attractions are far from each other.

The rodeo takes place at the AT&T Center, located within the grounds of the San Antonio Stock and Rodeo Show. If you follow the NBA you will probably recognize this arena. This is San Antonio Spurs’ home! Every year, for the most part of February, they play a series of away games. That’s when dirt covers the floor! 🙂

For me, having access to the Terrace Club made this experience even more memorable. We had a wonderful buffet dinner with a lot of wine at the Terrace Restaurant, and a great time while waiting for the show. Time just flew. From the Terrace you can see the arena, so you can easily go to your seat when you realize the beginning is close. Very convenient.

Terrace Restaurant at the AT&T Center

Imagine any top event in the world, like basketball games, World Cups, Olympic Games,… As a journalist, I’ve been to the VIP areas of several major tournaments worldwide, and I was very impressed with how nice everything was. We were guests of The St. Anthony Hotel, which supports the Rodeo, and I’m so thankful for their incredible hospitality.

Now, depending on your tickets, you may have access to the Terrace Club or one of the other clubs in the AT&T Center as well, so don’t forget to check it. The Terrace is located on the 4th level and our seats were on the Plaza level, one below.

Terrace Restaurant at the AT&T Center

I had already attended several rodeos in various countries, including the Calgary Stampede in Canada, considered the biggest in the world. But this was my first rodeo in the United States.

In common, the rodeos I’ve been to start with the cowboy opening prayer, which is a solemn moment when all the fuzz and excitement are toned down while cowboys ask for guidance and protection. Then, music takes over and the show begins.

There are 10 contestants (or teams) per event every day, and they are divided in brackets. The top 4 cowboys or cowgirls in each event from each bracket go to the Semifinals, and from there, the top 5 make it to the Finals.

We saw the competitors in one of the rounds of one of the brackets. Semifinals and Finals occur in the last 5 days of the rodeo, which in 2018 will be between February 20-24th. The rodeo starts on the 8th.

Do you know what makes a contestant become the grand champion at the end of the rodeo? That’s decided based on the most money accumulated. But every night they also announce a winner, so even if you just attend one of the bracket rounds like me you still see some celebration. The total prize money at the San Antonio Rodeo is $1,575,000.

Despite not understanding all the rules, it’s definitely fun to watch a tradition that has been maintained for generations in so many parts of the world. Most importantly, in San Antonio, they have high standards to take care of the 70,000 animals on their property every year. If someone doesn’t follow they may even be banned from future participation.

Each rodeo performance lasts 2 hours and they are generally followed by a concert, normally with a country star. We saw Chase Rice, who has a great presence on stage.

As some rodeo fans leave the arena immediately after the rodeo itself, those who are there more for the concert can take advantage and get really close to the ground. The concert happens at the same place inside the AT&T Center.

Chase Rice was kind enough to personally greet and take selfies with fans in the first row, which made a lot of Instagram timeline owners very happy.

The stage for concert rotates, so regardless of where you’re sitting, you will have a good view.

By the time the concert was almost over and they started introducing the band, a big surprise! There was another Brazilian in the house! hehe!

The band’s bass player, Marcello Kravitz, is from Sao Paulo, Brazil. I’d have loved to take his picture, but as the rodeo involves image rights, video recording or even picture taking is not allowed. The image inside the arena above and those in my video were provided by the organization.

Yes, a lot of people didn’t let Chase Rice go without a single shot, but I preferred not risking. 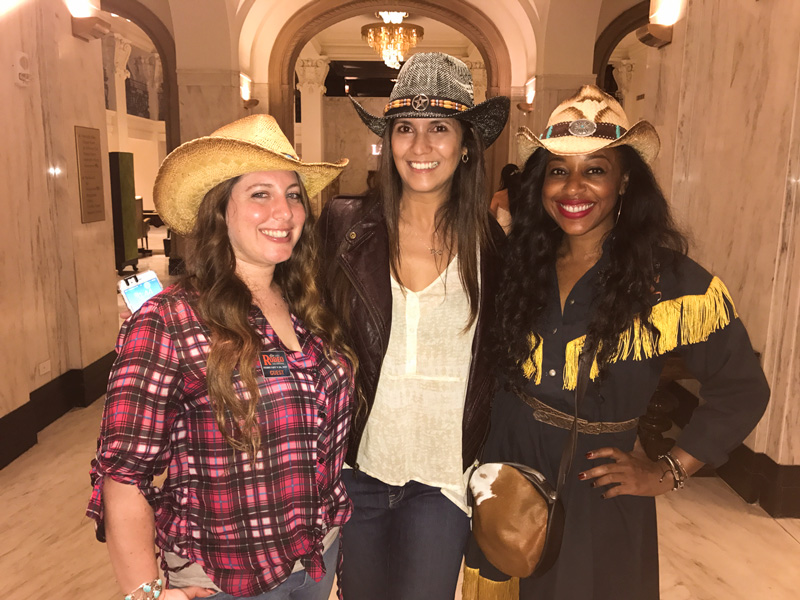 With colleagues Julia Axelrod and Kinya Claiborne upon returning to The St. Anthony Hotel

As you can probably guess by now, I had a great time and would love to go back. There’s a reason the San Antonio Rodeo has been chosen for 12 consecutive years for the Large Indoor Rodeo of the Year award. This is a people’s choice award given by the Professional Rodeo Cowboys Association (PRCA), and such win is unprecedented.

Indoor Rodeo? Yes, that’s another aspect that makes the experience much better. Believe it or not, during winter temperatures can get close to freezing in Texas. As the rodeo occurs in February, the weather is never a concern. Rain or shine, being hot or cold outside, the party is guaranteed.

Tickets to the 2018 rodeo are now on sale, starting at $15. In addition to the rodeo and the concert, they include admission to the grounds and carnival, with lots of free attractions, shows, and exhibits.

Tips to get the most out of your visit 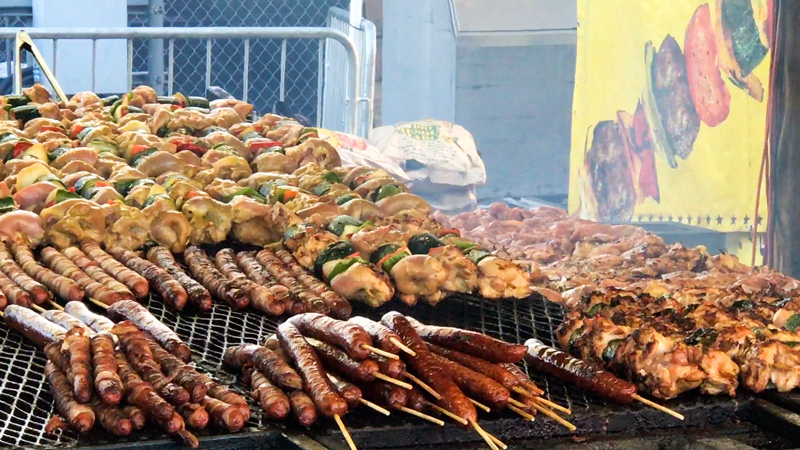 My only regret was not spending more time on the grounds, so don’t make this same mistake! 😉

Hope you also have a wonderful time! 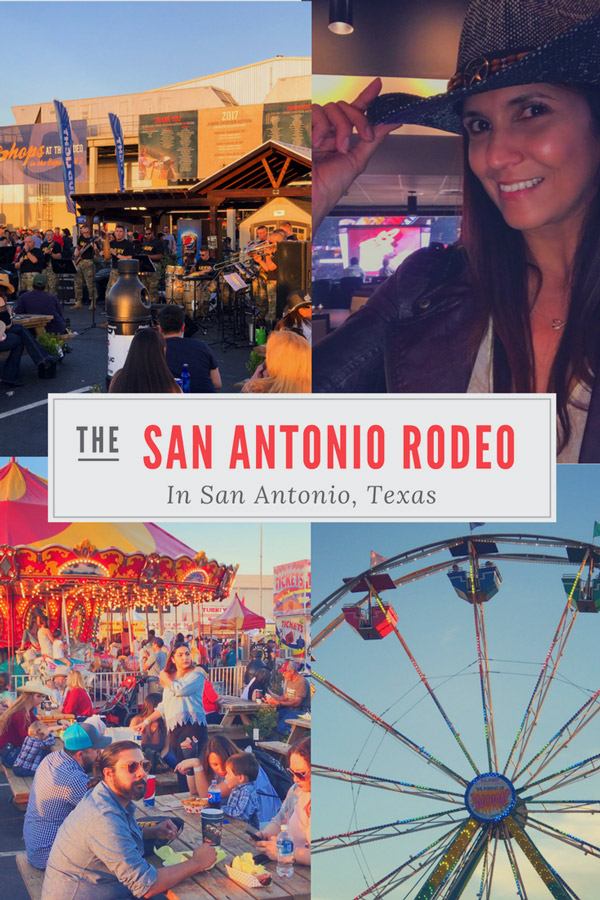 Check out what other travelers are saying about the San Antonio Rodeo on TripAdvisor ?
Did you like the video and the photos? Then let’s connect on Instagram and Facebook so that you can see in real time everything I’m up to and on YouTube so that we can travel together!

P.S.: As a journalist, my coverage was coordinated with the organization of the San Antonio Rodeo and I was a guest of The Saint Anthony Hotel, where I spent the weekend. I had total editorial freedom to choose any topic I’d like to cover and chose to detail my very own experience, as it was simply awesome. 🙂