On day 2 of this road trip from Texas to Nevada, we drove from Albuquerque, New Mexico to Las Vegas. Here you can see how was day 1

NEW MEXICO, ARIZONA AND NEVADA USA
We left Albuquerque (capital of the state of New Mexico), and our main stops were Winslow, Flagstaff and the Hoover Dam in Arizona

Enjoying the best of Arizona and Route 66

If you missed the story about our first day on the road, you can read it here.

We woke up at about 7 am and soon after were already checking out. It was really cold for April (less than 50F / 10C), especially after the extremely hot weather of the previous day. That’s when I realized the reason: the altitude. Albuquerque has an elevation of 5,312 ft, a considerable difference of 1,739 ft compared to Roswell. And you don’t really realize it, as you don’t go up any mountain along the way.

We drove a little bit around town but soon got off to the road. I’d have loved to spend the day in Albuquerque. On the way back we had more time to visit other areas, including Sandia Heights, considered one of the best suburbs here. I loved to see the adobe houses, it reminded me of Breaking Bad! If you don’t remember, the series took place in Albuquerque.

In yellow, our Stops in the second day on the Road. The highlighted points also correspond to the cities that appear in the video:

In the USA, Albuquerque is basically synonym with hot air balloons. As I explained in the video, in October the city hosts the largest hot air balloon festival in the world. And during the rest of year, weather permitting, you can be sure to spot a few up in the sky.

Back to the I-40, now I finally realize we’re on Route 66! Yayyyyyyyyy! It’s not like in the movies and like many people imagine, full of bikers. We even saw a Harley Davidson group traveling together, but for the most part, there are way more heavy trucks and semis than any other vehicle.

The historical Route 66 and the Interstate 40 are not the same, but they coincide in some parts, properly indicated by signs. Along the way, you find several souvenir shops (even the convenience stores will have a few 66 items), and when you arrive in Arizona Route 66 is a main theme along the entire freeway.

I was certain I had never heard of Winslow before and Gordon was insisting on the contrary.

He proved me wrong when we started singing: “Take it easy, take it easy… well I’m standing on a corner in Winslow, Arizona…” And can you believe the city created a tourist attraction based on that verse?

There’s a statue of Glenn Frey (from Eagles) right on that corner! This was the group’s first hit, in 1972. The store across the street has some speakers outside playing this and other songs, I just didn’t include it in the video because of the copyright. But that really creates a nice atmosphere.

Sometime after posting the video on YouTube, I had a pleasant surprise when the artist himself who created the “Easy” sculpture left a comment. Ron Adamson was actually disappointed that many people don’t mention that he was the artist. That made me realize how careless we journalists sometimes are. So, in time, thank you, Mr. Adamson, for getting in touch and for creating one of the main landmarks along Route 66! 🙂

From Winslow, after driving 20 more minutes you arrive at the Meteor Crater, a giant hole caused when a meteorite crashed the earth. The name “Meteor” has nothing to do with this though. Because the US Board on Geographic Names normally set up names of natural features derived from the nearest post office, this one acquired the name from the nearby post office named Meteor.

Today it’s well known that the meteorite has disintegrated with the explosion and few pieces still exist.

But in the beginning of the 20th century, when people still thought the hole was caused by a volcanic eruption, a businessman purchased this land for believing in the hypothesis of a meteorite and spent years searching for it. Not for scientific, but financial purposes.

As he imagined the object would be gigantic, he hoped to make 1 billion dollars (of early 1900’s currency!) upon finding the piece. The plans, of course, didn’t materialize, but his family still owns the place and they ended up finding another way to recover the investment: opening it up for tourism.

It’s worth a visit, I thought it was very nice and it has a good infrastructure.

Flagstaff is probably my favorite city in Arizona. I’ve been here other times and I love it! It’s so charming! Full of historical constructions, generally associated with Route 66, and this is also the gateway to visit several other attractions like the Sunset Crater Volcano, the Wupatki National Monument (I already shot in both places and as soon as possible will edit it), the San Francisco Peaks (those mountains that appear in the video between 6:20-6:28), the very Meteor Crater I just mentioned (40 minutes away) and of course Sedona and the Grand Canyon.

Another thing I enjoy here is the weather. In the hot Arizona summer, when temperatures statewide are constantly reaching 100 F (37 C), that’s something that has never happened here. Yes, Flagstaff has never registered more than 97 F (36 C). And even during summer it considerably cools down at night (never go out just in a t-shirt). The weather is very dry, so even in those hot afternoons, you don’t feel as hot as you would in Texas for instance. The problem is the winter. Temperatures can vary from 50 to 10 F (10 a -15 C) on the same day! The reason is again the altitude. Did I surprise you with the info on Albuquerque? Guess what? Flagstaff’s elevation is 6,910 ft.

After Flagstaff, we tried to quickly check the Sunset Crater volcano, but we soon discovered that’s something for a day when you have a little more time. The volcano is located in a park which also offers other attractions, so it wouldn’t be worth it to rush. But on the way back we stopped there again and did the full tour. Video as soon as possible. 🙂

Upon arriving in Nevada you are welcomed by a major 1931 engineering construction: the Hoover Dam. I had also been here before, but now, with the new bypass bridge, there’s also a new observation deck. And this one was new to me. But as soon as we stopped we realized that the sun was already behind the mountains, which gives a blueish tone to the images and is not good for photography. So we decided coming back another day. We returned in a beautiful sunny morning and captured all the fantastic colors you will see as soon as I manage to edit the piece! 🙂 I can only say one thing in advance: it’s worth the stop, even if you don’t have the luxury of choosing the best time of the day.

From there until Las Vegas it’s a short 40 min drive. We arrived at dusk when the city’s main street (Las Vegas Blvd South, also known as the “Strip” – where the most famous casino hotels are located) starts to gain life with all the lights. Amazing! We turned off the cameras upon arriving at the hotel and went out to celebrate life during dinner. After all, the trip was just starting. 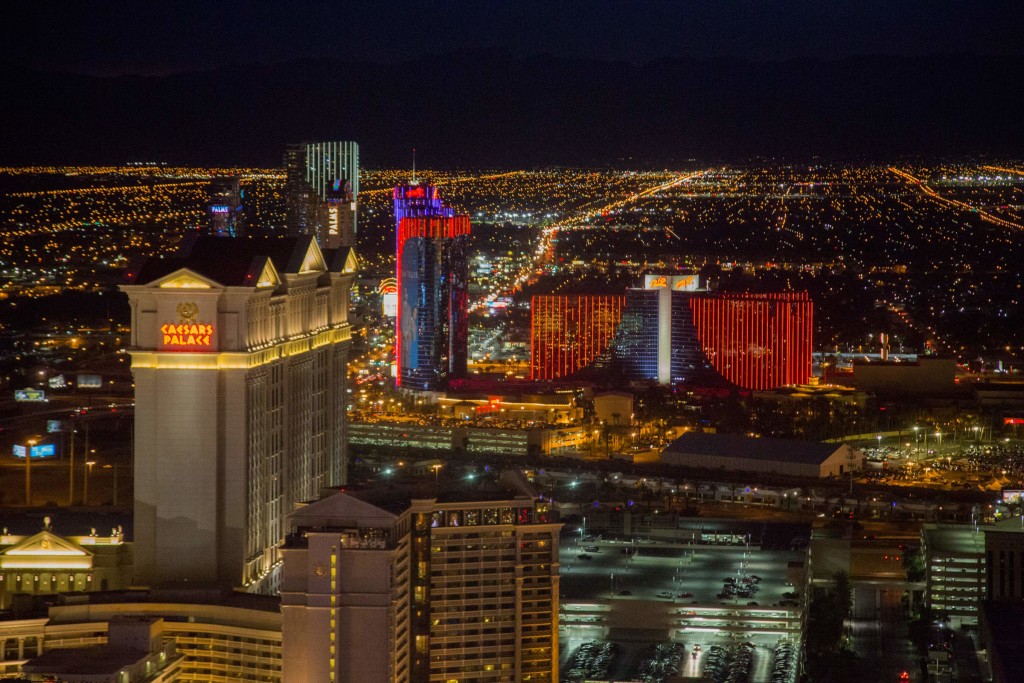 The second day on the road

Considerations for next time

General facts and figures of the entire trip