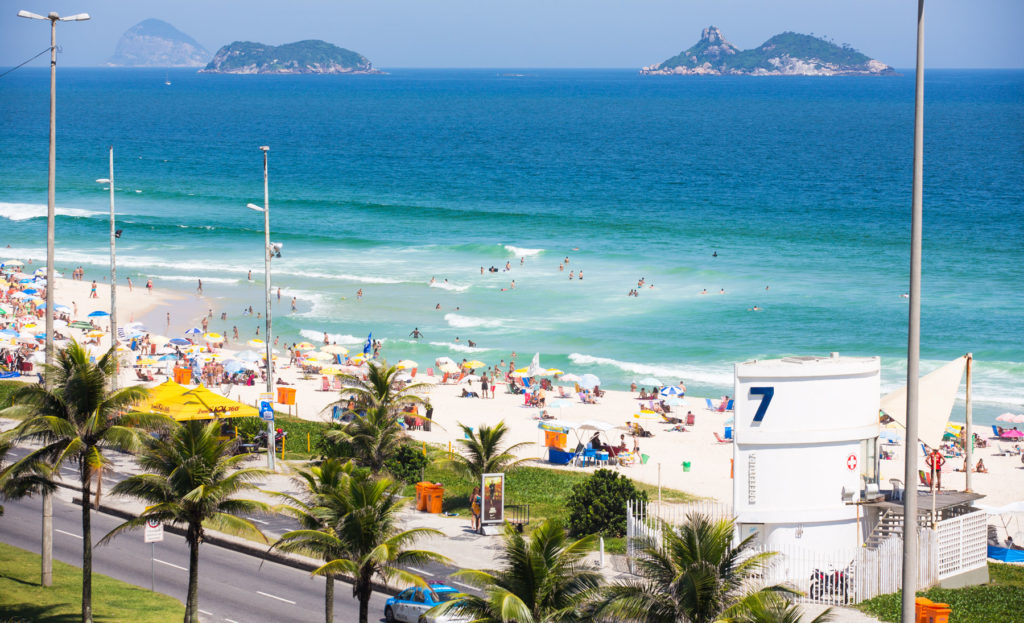 Where to stay in Rio de Janeiro

Choosing a neighborhood to stay in a foreign country can be one of the most complicated tasks when you are booking a trip abroad. You have to choose an area which is either close to where you plan to spend most of your time or has the perfect vibe you are looking for. Most importantly: must be safe and well served by public transportation if you don’t plan to rent a car.

Rio can be challenging when it comes to accommodation. A lot of hotels are not up to international standards and a lot of areas are not exactly what one would feel comfortable walking around.

Here I’ll give you an idea of what to expect in most of the well-known neighborhoods, or at least the neighborhoods you are most likely to find hotels, hostels or short-term rentals.

Rio is divided into 4 main areas:

If you already know one thing or two about Rio, your next question is “and what about the favelas”? Favelas are those shantytowns mostly controlled by drug lords where people live in extreme poverty and – every once in a while – stories about crimes make the news. Well, those are located in all areas, in almost every neighborhood.

Unlike most places in the world where the rich and famous live on the hills with the best views, in Rio most of the hills are occupied by favelas for historical reasons. But they don’t necessarily mean danger. Several favelas today have programs welcoming tourists (even some bed and breakfasts) and things have really changed in the past decades.

So, in a nutshell, here are the pros and cons of top neighborhoods in Rio de Janeiro:

This is the neighborhood I lived for close to 10 years and my favorite in Rio!

Pros: Great vibe, there’s a beach, some of the best restaurants in town, you can walk everywhere in the neighborhood and 2 subway stations have just been open, making transportation even easier. There are lots of flats, hostels, and short-term rentals as well, most with no parking though (so pay attention to that if you have a car)

Cons: Most expensive area in Rio, where you pay 1 1/2 or twice more for everything (meals, accommodation, goods, etc). Hard to find parking. The few parking lots in the area charge absurd prices. There are only 2 hotels (a 4-star oceanfront with the second tower of flats and another one in the main boulevard in the neighborhood). Some people consider the Sheraton at Av Niemeyer at Leblon too (even Starwood’s website does), but they are actually located in another area called Vidigal, near the favela of the same name (but it’s safe). Despite being within walking distance to Leblon, I wouldn’t do the walk at night. For more information about Leblon, check out this other article.

The most trendy neighborhood in Rio, where everyone can feel like “the Girl from Ipanema”

Pros: Great vibe, the most sought-after beach and lots of great restaurants as well. More hotel options than Leblon, great access to public transportation. From Ipanema you can walk to Leblon, Arpoador, Copacabana and Lagoa in about 10-20 min, making it very easy and convenient to get around

Cons: Just like in Leblon, it’s a very expensive area. Also, during summertime and sunny weekends, the beach near Arpoador gets so crowded that occasionally you may feel unsafe. Just use your common sense. You can read more about Ipanema in this other article.

The most famous neighborhood and beach in Rio de Janeiro

Pros: You can find everything in Copacabana, even the most recommended emergency clinic (with doctors who speak English). The neighborhood is very well served by public transportation and is the place to be for the traditional New Years Celebration. Also, where most of the hotels are located. You have plenty of options for flats, hostels, and short-term rentals too. There are constant events going on at the beach.

Cons: It can be too touristy at times, and too busy in terms of traffic and foot traffic. Also, several hotels are not up to international standards, so read all the reviews before booking. Once my mother-in-law stayed at an oceanfront hotel where the elevator was probably the same since the 50s! So don’t assume that because you’re close to the beach you’ve got a great deal. If it seems too good to be true, in Copacabana there’s certainly a catch, so make sure you do a careful research. Most accommodations (even short-term rentals) do not offer parking. You can read more about Copacabana in that same article

Very quiet neighborhoods, with easy access to the Rodrigo de Freitas Lagoon and parks like the Botanical Garden and Parque Lage.

Pros: More affordable locations compared to the ones mentioned previously, with nice leisure areas
Cons: They are transition neighborhoods (which link downtown to further away neighborhoods) so there’s a lot of traffic in the main avenues during most of the day. Needless to say, rush hour is chaotic. Also, I don’t recall hotels there… only short-term rentals. There are buses but no subway. And no beach.

These neighborhoods are great options for people wanting to stay in Zona Sul without paying Zona Sul prices everywhere.

Pros: Generally more affordable and lots of options of bars and restaurants
Cons: No beach and no major leisure area. Botafogo has a subway, but not Gavea and Laranjeiras. Botafogo can also be very busy and noisy on weekdays

Pros: With the exception of the very beginning of the beach (area towards Zona Sul), the vast majority of the beach is clean and safe. Most short-term rental condominiums offer swimming pools, saunas, barbecue area, parking, etc, for the same price (or cheaper) than you’d pay on the Southside. For instance, for the same amount of money you’d spend at a small place in Leblon 3 blocks away from the beach, here you can rent an oceanfront condo with a nice swimming pool. Lots of options for shopping malls, for all tastes and wallets. Also, this is where you find some brand new hotels, recently inaugurated for the Olympics.
Cons: Traffic can drive you crazy if you have to go often to the Southside or downtown. I worked here for some time while living in Leblon, and a route that should normally take 30 min would constantly turn into 90 min between Wednesdays and Fridays. Go figure why Mondays and sometimes Tuesdays were generally good! Also, the subway only reaches the beginning of Barra. There is a bus rapid transit system (BRT) connecting the subway to the rest of the neighborhood, but I’ve heard complaints that after the Olympics the schedule is irregular and not as frequent anymore. Also, if you don’t have a car you will end up spending a lot on taxis and Ubers, as here you need a car to go everywhere.

Very similar lifestyle compared to Barra, but further away from the south side and downtown

Pros: Similar quality of life as compared to Barra da Tijuca, with nice condominiums & rental properties. Great options for beaches, which are clean and safe. Prices are even cheaper than in Barra. Easy access to Prainha and Grumari, the beaches that are considered by many the best in Rio due to their exclusive nature
Cons: As it’s further away, think about twice the traffic and twice the hassle with public transportation. Also, taxis to/from downtown or the south side can be expensive.

The most bohemian neighborhood in Rio, with an active and vibrant nightlife

Pros: Exactly the nightlife, as you can experience an authentic Rio. Also, close proximity to downtown and the Santos Dumont airport. Lots of hostels.
Cons: The neighborhood is in transition, with lots of refurbishments going on. If you’re not a young adventurer looking for accommodation on a budget, I wouldn’t stay here. You can read more about Lapa in that same article previously mentioned

A charming artists’ community located on top of a hill with some of the best views in Rio.

Pros: Santa Teresa has recently become one of the most sought-after neighborhoods to stay in Rio. The most famous restaurant in town (Aprazível) and the celebrities favorite boutique hotel (Hotel Santa Teresa) are located here. The views are amazing basically from any property. Also, the neighborhood has a lot of history, with some historical constructions still standing. Even the famous tram is back operating regularly.
Cons: Remember what I said in the beginning about the favelas being located on the hills? Well, there’s no exception here. Santa Teresa is surrounded by favelas. For that single reason, I avoid getting in or out of the neighborhood at night. But, as my husband says, it might be my own paranoia for remembering the old days of Rio. Today things are different and it’s most likely safe, but as I haven’t experienced it yet, I can’t say for sure. Also, it’s hard to access via public transportation. 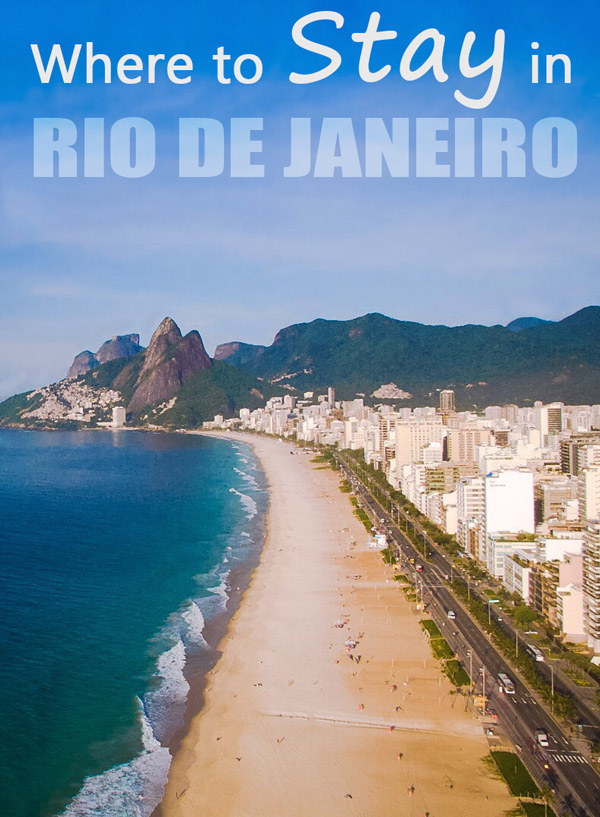 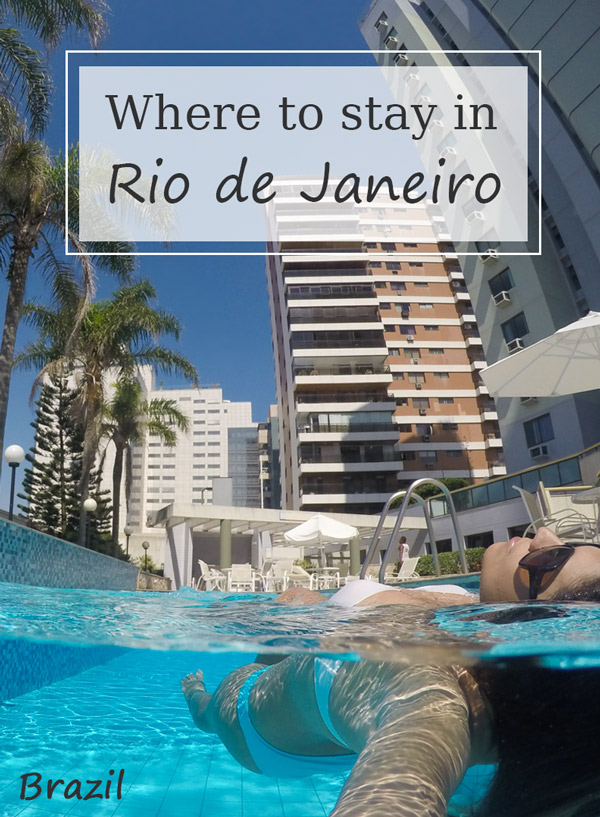 The reason I didn’t mention the Northside is that that’s not a place I would stay, so I wouldn’t recommend. Not that it’s not nice or safe to live, but because there’s not much to do around and not many accommodation options.

Hope this helps with your planning. If I did not cover an area you are interested, let me know in the comments and I’ll get back to you.