The Red Square is probably the most symbolic place in entire Russia. If you have to choose only one attraction to visit, don’t even think twice

MOSCOW, RUSSIA
Moscow is the capital of Russia

Moscow is a place marked by contrast: chill vs heat, communism vs capitalism, vanguard vs tradition, wealth vs poverty. At the Red Square, the heart of the city, all of this becomes even more evident.

The Red Square is where the main Russian landmarks like the Kremlin, Lenin’s Mausoleum and Saint Basil’s Cathedral are located. Also, it’s from where all major streets in Moscow originate.

It’s a common mistake to think that the name “Red Square” is because the color red is associated with communism or because several buildings there have tones of red. The name probably comes from sometime in the 17th century (historians don’t know for sure), when neither the buildings were red nor communism existed. 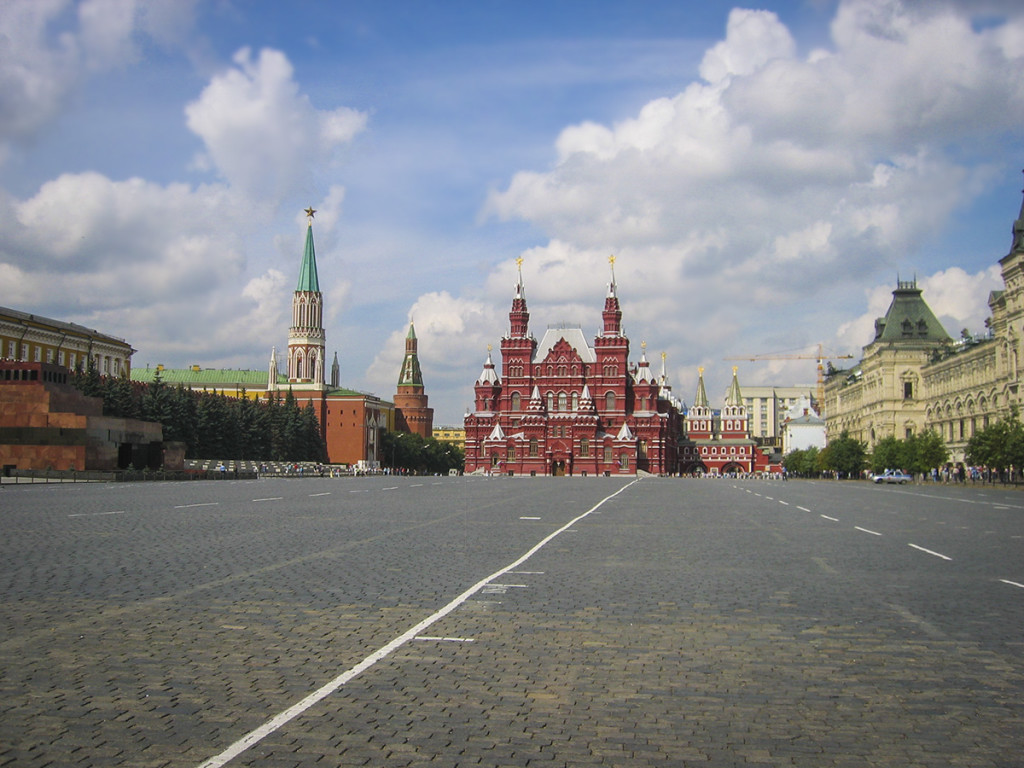 To understand the true meaning, we need to dive into the Russian language. In Russian, Red Square = Красная площадь (Krásnaya Plóshchaď). The word красная (krásnaya – and yes, I learned the Russian Cyrillic alphabet while there. But only the alphabet, not the language…) can mean either “red” or “beautiful”.

“Beautiful” was a popular meaning during the Middle Age, and the name was a reference primarily to St Basil’s Cathedral (that magnificent construction that kids think it’s another Disneyland castle. At least I used to…).

The name ended up transferred to the whole area. All this I learned with a guide I hired for a tour the first time I visited Moscow in 2006. Of course, you can always get information online, but being in Moscow I wanted to be able to ask questions and understand what does it mean to be a Russian. And it was so worth it. 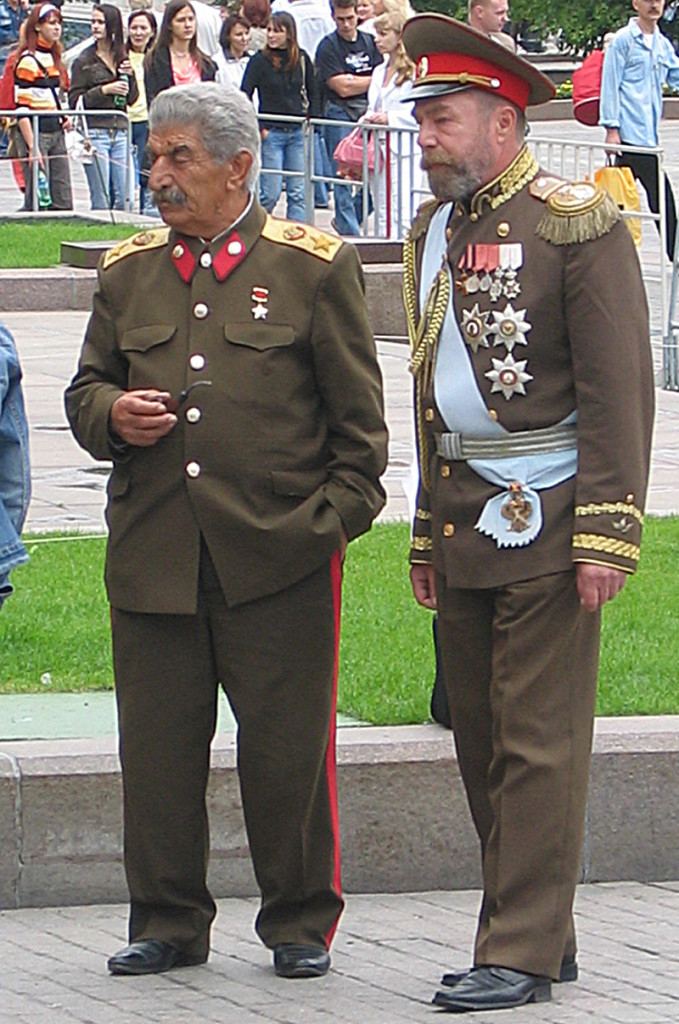 But certain things you observe yourself are equally valuable. At one of the entrances to the Red Square there are several “characters”: from former war heroes wearing their military uniforms and medals who simply stand and pose for pictures in exchange for money to the old Soviet ladies with their heads covered who collect all coins tourists through at Russia’s Kilometer Zero landmark (a bronze plaque from which distances are measured). Unlike at the Trevi Fountain, in Rome, it is fully acceptable and even expected that they will simply take your money.

Just in front of the Km Zero, you can find the Resurrection Gate and the Iverskaya Chapel. That’s the main entrance to the Red Square. Unfortunately, both original constructions from the 16th and 17th centuries were destroyed in 1931 to make room for heavy military vehicles to access the Red Square during the Soviet era. After the Revolution, the Soviet government began to destroy sacred sites. What we see today are reconstructions from the 90s.

Resurrection Gate and the Iverskaya Chapel at the Red Square

The chapel for instance used to house a replica of Panaghia Portaitissa (the “keeper of the gate”). The replica itself was from the 1600s, as the original from 999 is kept at a monastery in Greece.

Panaghia Portaitissa is an Eastern Orthodox icon of Virgin Mary (icon = flat panel painting depicting Jesus, Mary, saints, and angels venerated by Orthodox Churches). It is believed that many centuries ago she was stabbed in the cheek by an iconoclast and blood started to flow from the wound. This wound remained on the Virgin’s face, and so she is always depicted with this small injury.

With the reconstructions of the Soviet era, Panaghia Portaitissa was moved to another church in town, the Church of the Resurrection of Christ. To this day the icon is revered for its miracle-working.

A new copy of the original Iberian icon was made in the 90’s, which was blessed by Patriarch Aleksiy II, the first Russian Patriarch of the post-Soviet period. Traditionally, everyone entering the Red Square should first go to the Chapel and pay homage.

Once you are in fact at the Red Square, 4 main buildings call your attention: 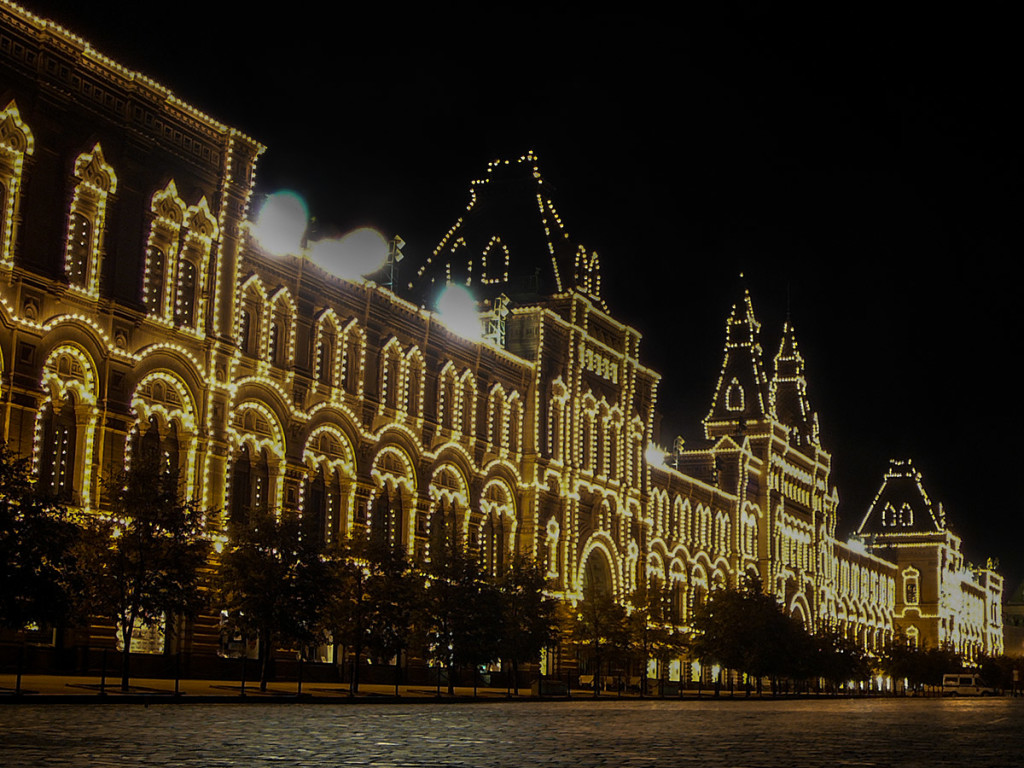 GUM Mall at the Red Square in Moscow

GUM’s stand for Glavny Universalny Magazins or “main universal stores”. These are how the most important department stores in several Russian cities were called during the Soviet days.

The Red Square GUM has an elegant and opulent architecture topped with a glass-roofed design that at first may look fragile, but then you reconsider when you realize every winter they support heavy snowfall accumulation.

By the time of the Russian Revolution of 1917, the building contained some 1,200 stores. After the Revolution, the space was nationalized and became a model retail enterprise for consumers throughout Russia regardless of class, gender, and ethnicity. A space representing the main characteristics of socialism.

In fact, during the Cold War, those were the few stores in the Soviet Union that did not have shortages of consumer goods. The queues were long though, often extending entirely across Red Square. Today, with some 200 stores, locals joke by saying that the place is actually an “exhibition of prices”, as no one can afford to buy anything.

In the evening, the building is fully lit by millions of small decorating lights, like we do in the west for Christmas. Actually, there’s special lighting at all Red Square buildings. Don’t forget to go for a walk also in the evening.

Before returning to the hotel, it’s impossible not to pay attention to one more building in the Red Square area. One that is not a Russian tradition and yet is visited by thousands of Russians and foreigners alike every day: the McDonald’s.

Located almost in front of the main entrance to the Red Square, for many it would be considered the triumph of capitalism. McDonald’s is so popular that I had to wait in a 30-minute line before getting my cheeseburger (yes, I had to try it).

I asked here and there and people told me it is always like this. Well, it is for sure a little strange to see such an American symbol in the heart of Moscow. But to me, it doesn’t mean the victory of one side over the other. It simply shows both sides can perfectly coexist.