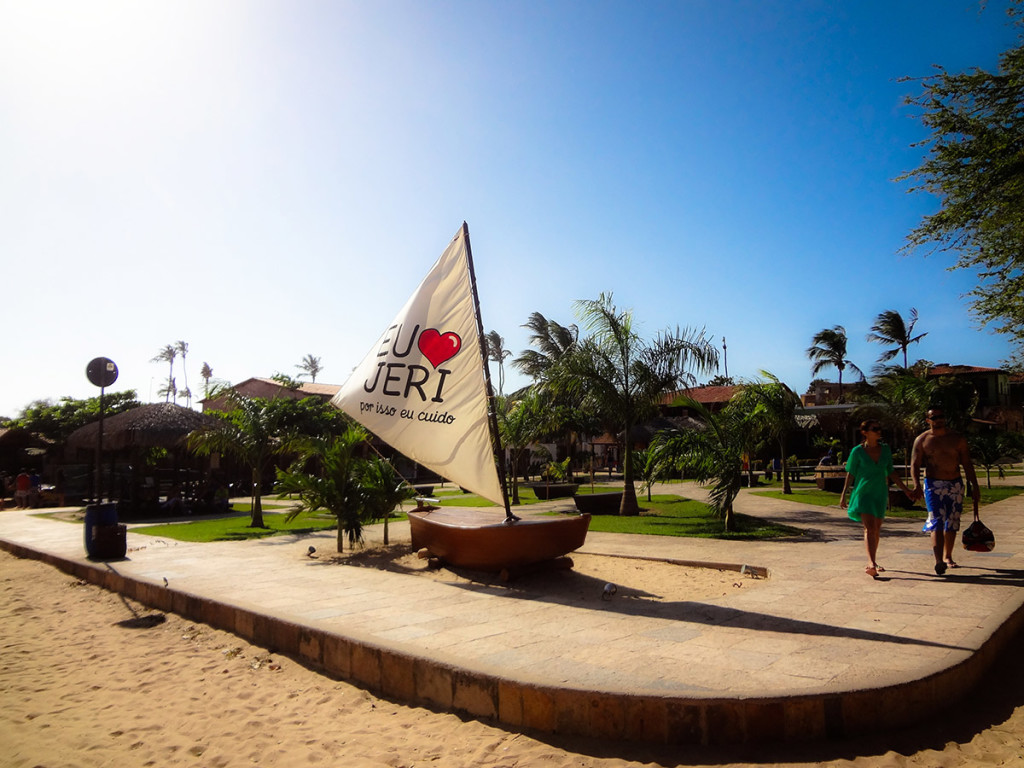 Few people know it, but there are no roads to get in and out of Jericoacoara, Northern Brazil. Actually, there’s no pavement in the entire village, not even downtown. The reason is that it is located at a protected area inside a National Park. So, you have to drive for a while on the sand dunes. Or find someone who will drive for you.

Visiting Jericoacoara had been on top of our list for a while. We had always heard about the green warm beaches and the unpaved fishing village which was attracting so many Europeans. In fact, during the week we spent there in August 2014, I could clearly say that 60% of visitors spoke either French, German, Dutch, Spanish or – in a lesser scale – English. They are adventurous young adults who take a break from real life and go somewhere in the world for a long period of time. In Jericoacoara, it’s normal to see these foreigners selling the handicrafts they create or natural sandwiches at the beach.

But let me go back to the challenge which was getting there. Jeri, as it’s popularly called by the locals, is located about 300 km from Fortaleza, the capital of the state of Ceará. Travels agencies have daily transportation services connecting both cities, which leave Fortaleza around 9am and depart Jericoacoara at around 3pm, costing 150 reais / US$ 65 per person for the round trip. But we didn’t want to get stuck with their schedule, we wanted to arrive as early as possible and go enjoy the beach. According to our plans, it would be a 5 hour drive, so we got up at 6am to get the road. Having a rented car with us all this time would be more expensive, but we wanted to have the freedom to also go anywhere we wanted from there.

Well, nowhere in Fortaleza we could find a four wheel drive car for rent. This would guarantee no problems driving on the sand. But as we had read some reviews online that it was possible for smaller cars to reach the village via a different route, we took our chances. I followed some Brazilian chats in Portuguese which explained that as soon as you arrive at the city of Jijoca (which Jeri belongs to), there are accredited guides right at the entrance waiting to help. You could pay them 50 reais (US$ 22) to drive your car or join you in your car and show you the way. Remember, as there are no roads, there are no signs either. It’s a real maze and you need someone who knows the area.

Maybe it was not our day and we got the only clueless boy available. Or maybe it’s a tourist trap. But the boy (apparently in his early 20s) didn’t know how to drive. I had to teach him what a clutch is (yes, rental cars in Brazil are not automatic). He did almost everything right: removed enough air out of the tires so that it would be easier to drive on the sand, he knew the way, and once he could finally get the car going, he did a pretty good job on top of the fluffy sand and we didn’t get stuck. After a 30 min drive, we were almost there and – all of a sudden – 2 big puddles appear on the way. He did not hesitate and went straight through the first one. As he knew where the shallow part was, he went directly there. But it happened to be pretty close to a tree, and his sudden turn to avoid the crash was almost like in those kids’ rides at amusement parks. 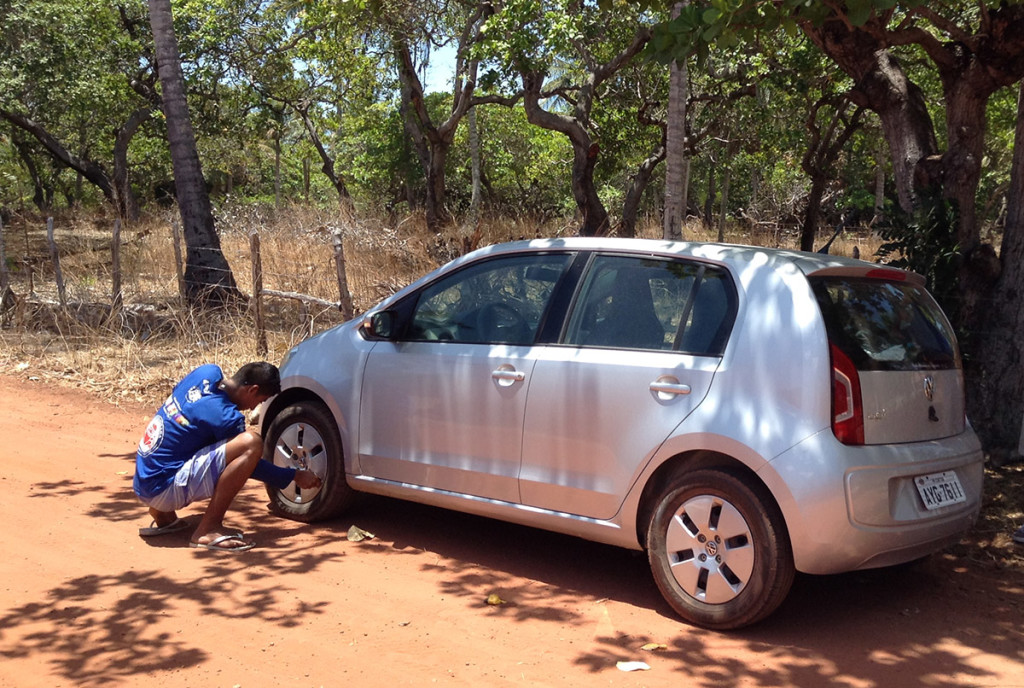 Here is our guide removing air from all of our tires. This was the beginning of the route to Jericoacoara, accessible to all car types.

At this point, we are in the middle of 2 puddles. My husband Gordon gets nervous, as the second puddle seemed deeper and the small car would probably not make it – and remember, we have a rented car. Not sure the insurance would cover such careless driving in case of an incident. Our driver could not engage the first gear and there was not even a single soul who could help.

Our decision was the safest at that point: return to Jijoca. “But we’re just 2 km away”, said our guide. “That means nothing if we can’t cross with this car” we answered.

Of course nobody was happy on the way back. The guide lost an hour of work and could foresee he wouldn’t get paid (although I ended up giving him something to compensate for his time, and he helped us finding another solution I’ll tell later) and Gordon took the driver’s seat against our guide’s advice and got pretty upset. His position was “if I can drive in the snow, I can certainly beat the sand”. We got stuck a few times, but with 2 people pushing the car, it was not that hard to get back on track. I was trying to mediate the conflict, which made the 30 minute drive seem like an eternity.

Back at Jijoca, we learned that lots of people in that town have four wheelers and drive tourists to Jeri. Our guide got us a parking spot in someone’s garage and a good deal with a driver he knew: 50 reais (US$ 22) for a private drive departing immediately. Otherwise, we could pay 20 reais (US$ 8,70) in a shared SUV, but would have to wait until the truck is full. Don’t know how fast it would be, but with our frustration (it was already past 1pm), fatigue and the heat, we were basically daydreaming about paradise.

This new driver took us in a completely different way, really through the sand dunes (that’s what you can see in the video above). And it was so beautiful! He dropped us at the pousada Blue Jeri, where we had a reservation, and as soon as he left, we got the news that would totally transform our experience in the village: they were overbooked, and we had been relocated to a different hotel. The new place was just around the corner, but when you’re carrying luggage in a sunny, hot and humid day and cannot use the wheels, things can get complicated. 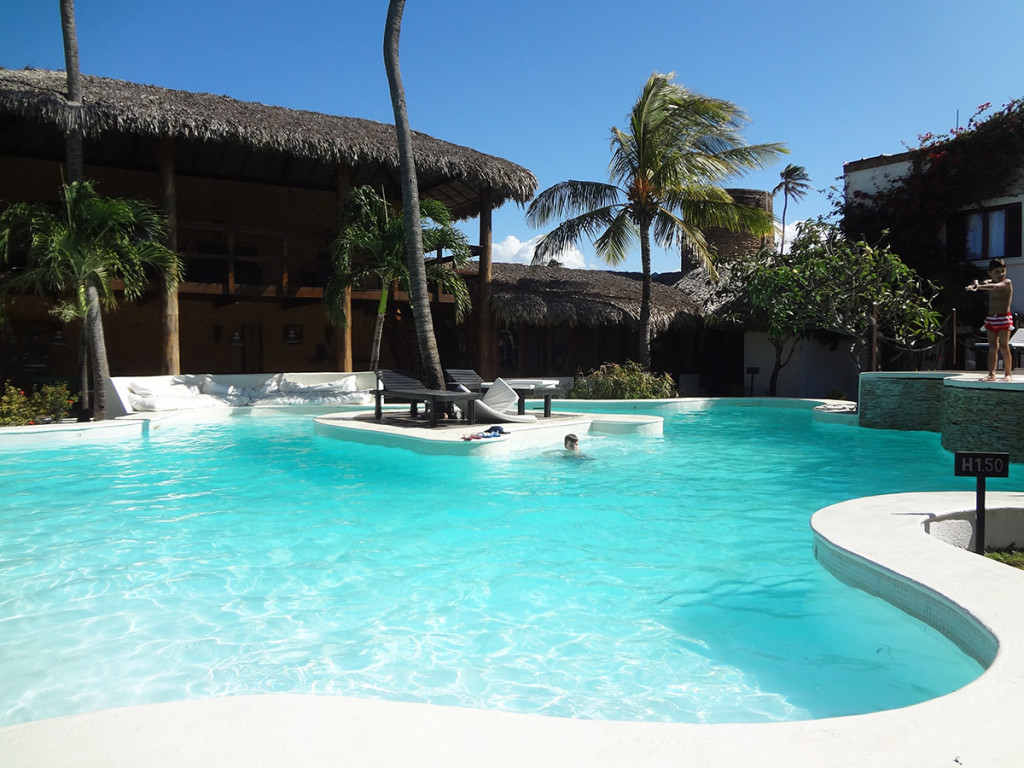 My Blue Hotel, in Jericoacoara, Brazil

The receptionist guaranteed the effort would be worthwhile. Even today I cannot stop laughing when I remember Gordon’s face. He wanted the pousada he had chosen! But when we arrived at our final destination, My Blue Hotel, that was really everything we could hope for. And the week which started not so pleasant turned out to be one of the best in our lives. 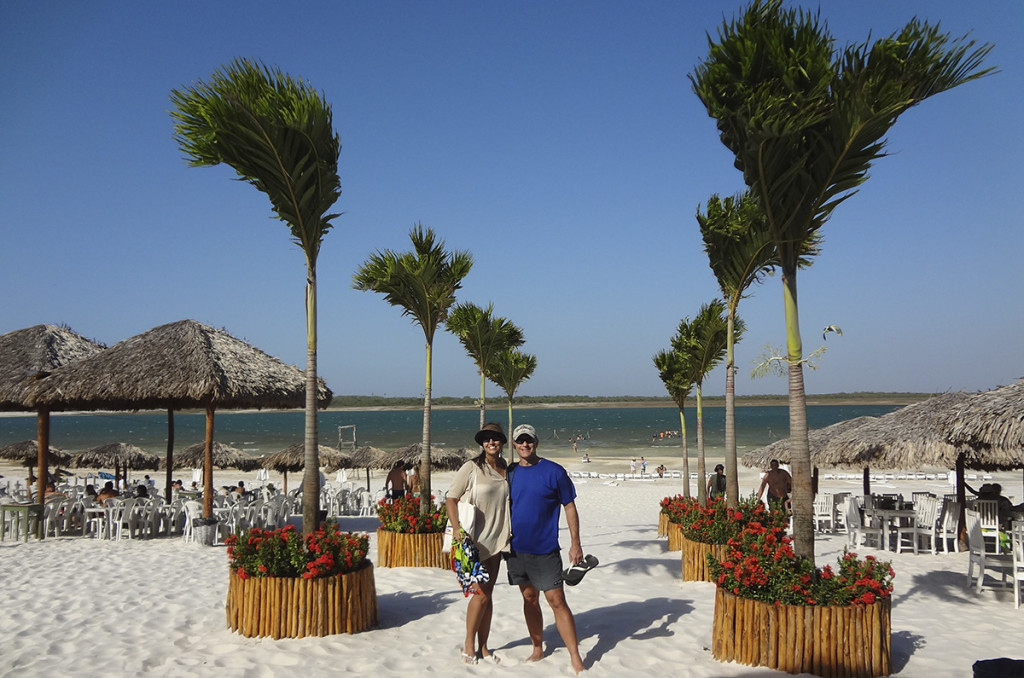