Damnoen Saduak’s floating market is one of the closest to Bangkok, the capital of Thailand. You can have the whole experience in one morning.

DAMNOEN SADUAK, THAILAND
Damnoen Saduak is where the most traditional floating market close to Bangkok occurs

Visiting a floating market in Thailand was always at the top of my to-do list in the country. In 2004 I had the chance to spend 1 month in Thailand, working in Bangkok. And when you look for things to do in Bangkok, Damnoen Saduak – a short drive away – should be on your list too. Here are my tips for you to make the most out of your visit.

The Adventure until the Floating Market

I got up at 4 am to go visit the closest floating market, which is basically a market-place in a river. People buy and sell stuff from their own boats. It’s a shame that there’s none in Bangkok itself, so I had to drive 1:30 hour (about 100 km/60 miles) to experience this on my own.

The day before I arranged everything with a taxi driver who was suggested by a friend. There are buses that can take you there for just 50 Baht, but as I was on a tight schedule, I didn’t have much choice.

But guess what? The driver forgot the appointment… Maybe with his limited English, he didn’t even understand what I meant in first place… Anyways, as I was already up, I was lucky enough to find another driver from the hotel who could take me there, wait for me, and drive me back.

The cost? 1000 Baht, the local currency, which at the time was equivalent to about 30 dollars (check current exchange rates).

I may have overpaid, as at that time information about costs was not easily available online as it is today. Worse yet, I know that today you can take a tour from Bangkok and pay as little as $35 for the whole experience (and I still had to pay for the boat)… But at that time, $30 seemed a pretty good deal to me, especially given the early hours and the last minute situation.

The floating market is so unique.

Traditionally, that’s how Thais, Vietnamese, Indonesians, and other Southeast Asians used to buy and sell vegetables, fruits, etc. Today not so much anymore, but they maintain the tradition in some locations.

At Damnoen Saduak, the main criticism is that the tradition is lost, and it only occurs for tourism purposes. As I explained in the video, I’m pretty sure I saw the real thing for arriving there so early.

They start getting ready at 3 am, and by 11:30 am everything is closed. Editing the video brought back to memory indescribable smells, sounds, the negotiation for every purchase… and even the fear to fall down from the boat, which is the most natural thing for those women.

There was no need to go there as early as I did, but I wanted to be on site no later than 6:30. The reason? I had to go back to Bangkok and start working at 9 am!!!

In that sense, I guess I was even lucky, as I felt like I really experienced a local tradition. Only after this trip, I learned that there are lots of scams involving the Damnoen Saduak floating market. Some taxi drivers get a commission from the store that organizes the boat tours to drive people there. The store owners then inflate the price in order to compensate.

My taxi driver was so clueless that he didn’t even leave the car and slept the whole time. And during the boat ride (I had a small boat for myself), I was one of the very few westerners on the river. Later I learned that during normal morning hours there are so many tourists that people almost feel like being in Disneyland.

Taxi was the most convenient way for me, but not necessarily the best idea for everyone. So here are a few more options:

There are buses departing from the Southern Bus Terminal in Bangkok to Damnoen Saduak. The fare is around 50 Baht. Take bus #78, which leaves every 40 minutes starting at 6 am.

The drop off point is about half a mile away from the floating market itself, but you can already go by boat.

If you’d rather avoid going there by yourself, several companies organize tours from Bangkok. I got this list at TripAdvisor

The advantage is that you can combine the trip to Damnoen Saduak with other activities during the day, in addition to having a guide teaching you history and interesting facts and figures. 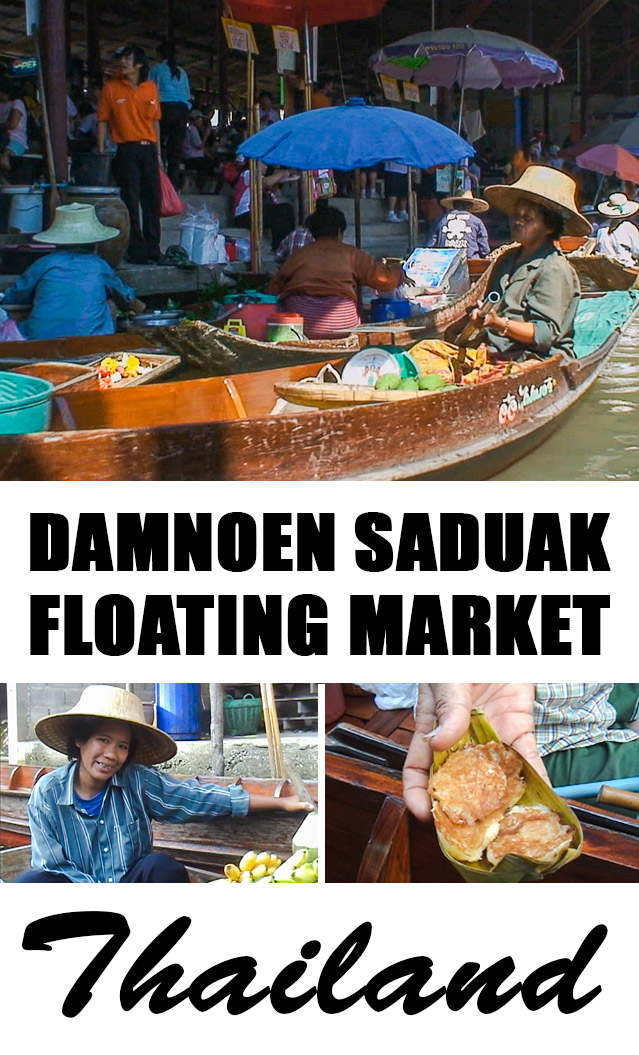 Thanks for embarking on this trip with me!

Maybe if you have the time, consider also visiting the Amphawa floating market, which is a little further away. I haven’t been there but learned it’s smaller than Damnoen Saduak and during high season can also be crowded. But, most importantly, check the opening hours, as some floating markets don’t occur every day. 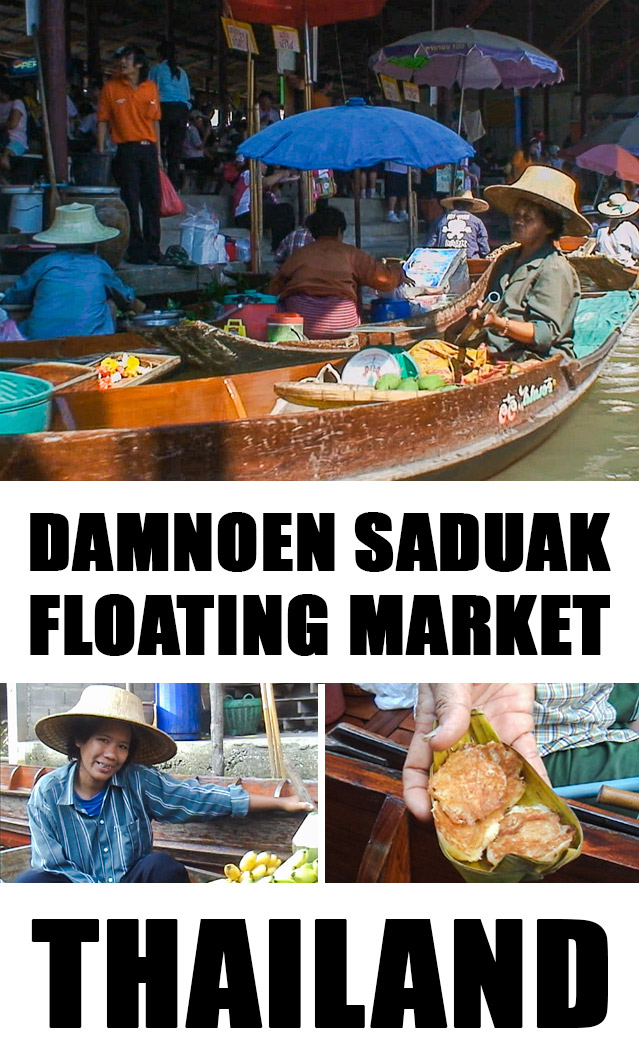 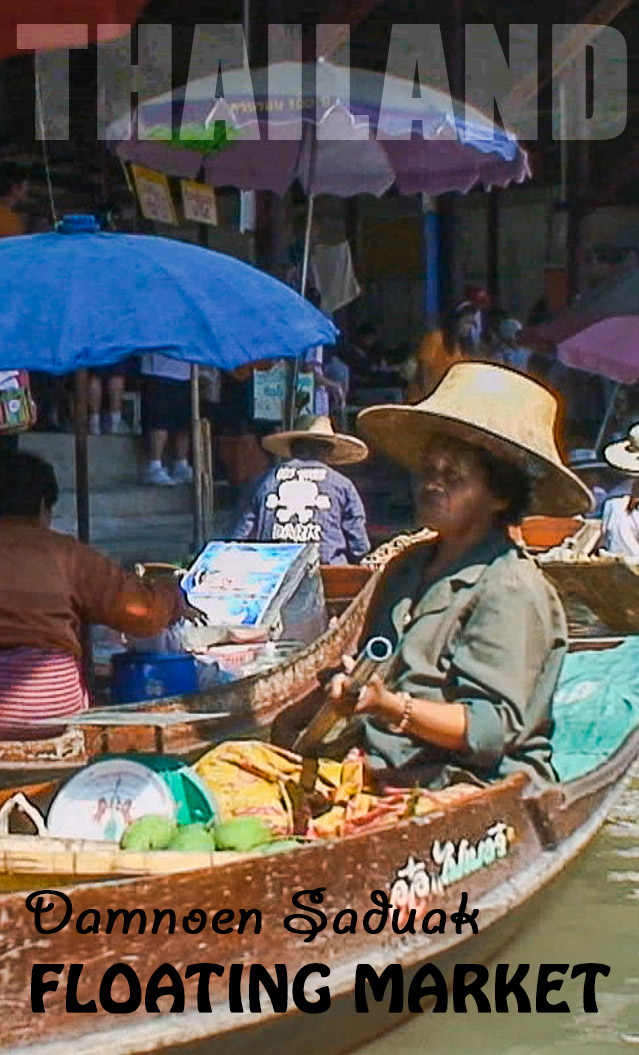