NIAGARA FALLS, ONTARIO, CANADA
The Niagara Falls are the largest waterfalls by flow rate in the world

I had always heard people saying how beautiful the Niagara Falls are. Especially after being to the Iguaçu Falls in South America – and loving the experience – I was certain this place would meet my expectations.

Iguaçu is actually bigger, but what amazed me here was the color of the water – soooooo green – and the fact that the falls are right in the middle of the city. They’re not in a national park like in Iguaçu, where you have to pay entrance fee and leave by 5:00 pm. In Niagara, it’s up to you if you want to be there for the sunrise.

Facts and Figures about Niagara Falls

Niagara Falls is actually the collective name for 3 waterfalls located in the border between the United States and Canada: the Horseshoe Falls, the American Falls and the Bridal Veil Falls. The Horseshoe Falls are the largest, being mostly located in Canada. The other 2 are in American soil.

Combined, they form the highest flow rate of any waterfall in the world over 165 feet (50 m) high. Horseshoe Falls is actually the most powerful waterfall in North America. 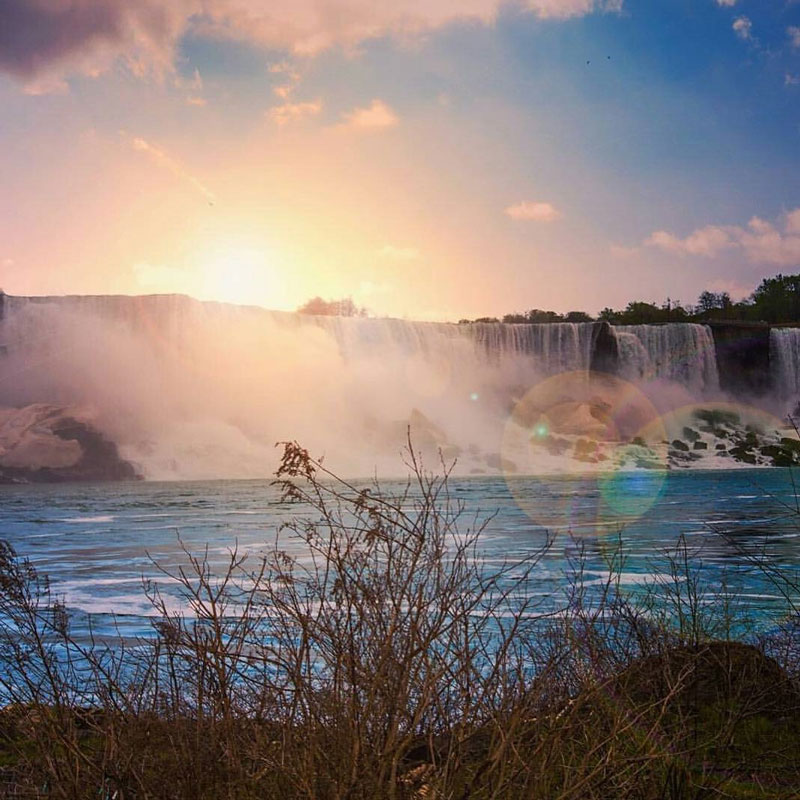 But wait a second, do you have to be in the USA or Canada to visit the falls? Either or. There are two cities called “Niagara Falls”: one in state of New York and another in the province of Ontario. From both you can see the falls. They are connected by a bridge, so it’s also easy to cross and have a look from a different perspective (just beware of traffic jams because of the customs).

If you’re in the USA, the biggest city nearby is Buffalo, NY, just 30 min away. From there it’s about the same time to reach the Canadian Niagara Falls, as you can also clear customs in Buffalo. That’s exactly what we did. We read several tips online of people suggesting to cross the border in Buffalo and not in Niagara Falls in order to avoid traffic jams, and as we were coming from New York state it made sense. There was just one car ahead of us at the border patrol and the whole process went very smoothly.

If you’re in Canada, chances are you are in Toronto, the capital of Ontario. It’s a little further away, but still, less than 90 min from Niagara. So close you can even just go for a day.

During this trip, we only stayed in Niagara Falls, Ontario.

The fact that the main attraction in town is totally free is a big plus. And after seeing the falls from various angles, we decided joining a few paid tours.

These are the ones you see in the video:

It’s that observation tower we went for sunset and to see the falls at night (which by the way is amazing! They project several colors depending on the day or if there’s any special occasion being celebrated. Sometimes there are fireworks as well).

In addition to the deck, there’s a revolving restaurant up there, which rotates 360 degrees every hour. But don’t worry, you don’t get dizzy. Actually you don’t even feel it!

Here you can read some reviews on TripAdvisor and see their combined options for ticket + dinner and/or other tours. If onsite you don’t get one of those coupons I showed in the video, it’s cheaper to buy the ticket online.

Journey Behind the Falls

In this tour you take an elevator down 150 feet (45 m) and arrive at a lower observation deck (scene at 6:55 in the video). This deck is closed during winter because of the ice buildup. Then you walk in a tunnel behind the falls. There are some windows open, so that you can see and hear the water. The noise is impressive! The water comes down at 40 miles/hour (65 km/h).

They give you that yellow rain cover I wear in the video, but that doesn’t protect much. Be careful with your camera! You can read some reviews on TripAdvisor.

This is the boat tour that takes you very close to the falls. If you don’t want to get soaked, you can seat in the lower level (and covered) deck. Luckily we had rain covers for our cameras because at some point, the water comes in all directions. At least during the day it’s not just a mist, so be careful with your electronics.

This tour occurs approximately every 15 min during high season and every 30 min during low season. They close during winter.

The reason the nighttime tour is more expensive is not only because the falls at night get really beautiful with the amazing illumination, but also because it lasts twice longer: 40 min (compared to 20 min during daytime). Here are the TripAdvisor reviews. 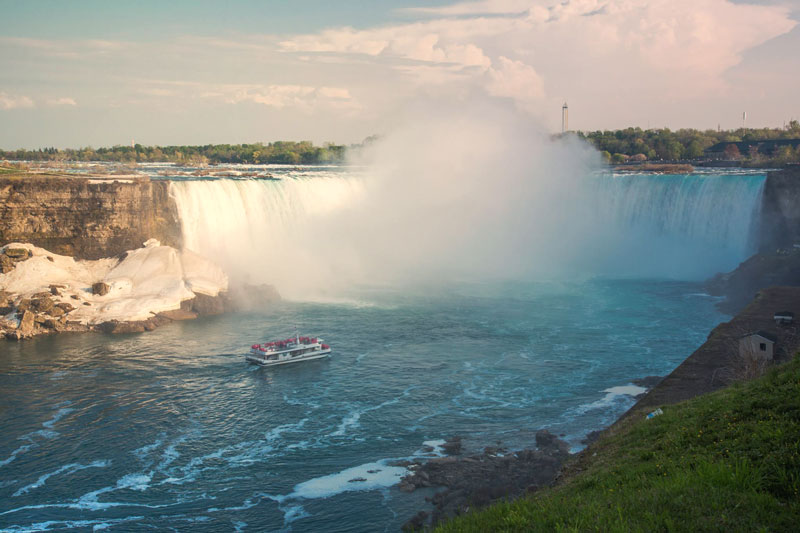 Other Places to Visit that also appear in the video

Address: Follow Regional Rd 100 and Regional Rd 55 towards Niagara-on-the-Lake, ON
Cost: Free to visit. Up to you if you stop at the wineries and shops… 🙂

As my husband is Canadian and familiar with ice-wine, he suggested we traveled to Niagara-on-the-Lake (about 30 min away) to explore the region. Wow! What a surprise! This is a very charming area by Lake Ontario! Toronto is straight ahead, just across the lake.

We drove there on our way to Toronto. Niagara-on-the-Lake is not exact along the route, but it’s a quick detour. When we arrived we realized there were several wineries we could have stopped for a proper visit, but as it was still in the morning and we had the drive to Toronto ahead, we ended up skipping the wine tasting. But we bought a few bottles for ourselves and gifts to friends!

This clock briefly appears between 9:36 and 9:40 in the video. It’s very beautiful and picturesque, and there’s a convenient parking lot.

The floral design changes twice each year. there’s one design for spring and another for summer and fall.

Address: 14184 Niagara Pkwy, Niagara-on-the-Lake, ON
Cost: Free to visit the park and the monument, CAN$4.50 to climb the monument

This is the memorial which honors the Major-General who died in that location during the 1812 War. It’s located in the beautiful Queenston Heights National Historic Site in Niagara-on-the-Lake, about 25 min driving from Niagara Falls. Seeing all that beauty, it’s hard to imagine that the place was the site of a bloody battle during that war.

We discovered the park totally by chance, as we were driving in the area and decided stopping when we saw some green. We were actually searching for a view point. We found one, and much more.

When we were there I didn’t realize you could climb the monument, otherwise I would have done it. The view from up there might be amazing, as this is very close to the Niagara river.

Lots of attractions and rides. Reviews on TripAdvisor here.

We enjoyed the dining options, but if you have kids, they will probably love this area. 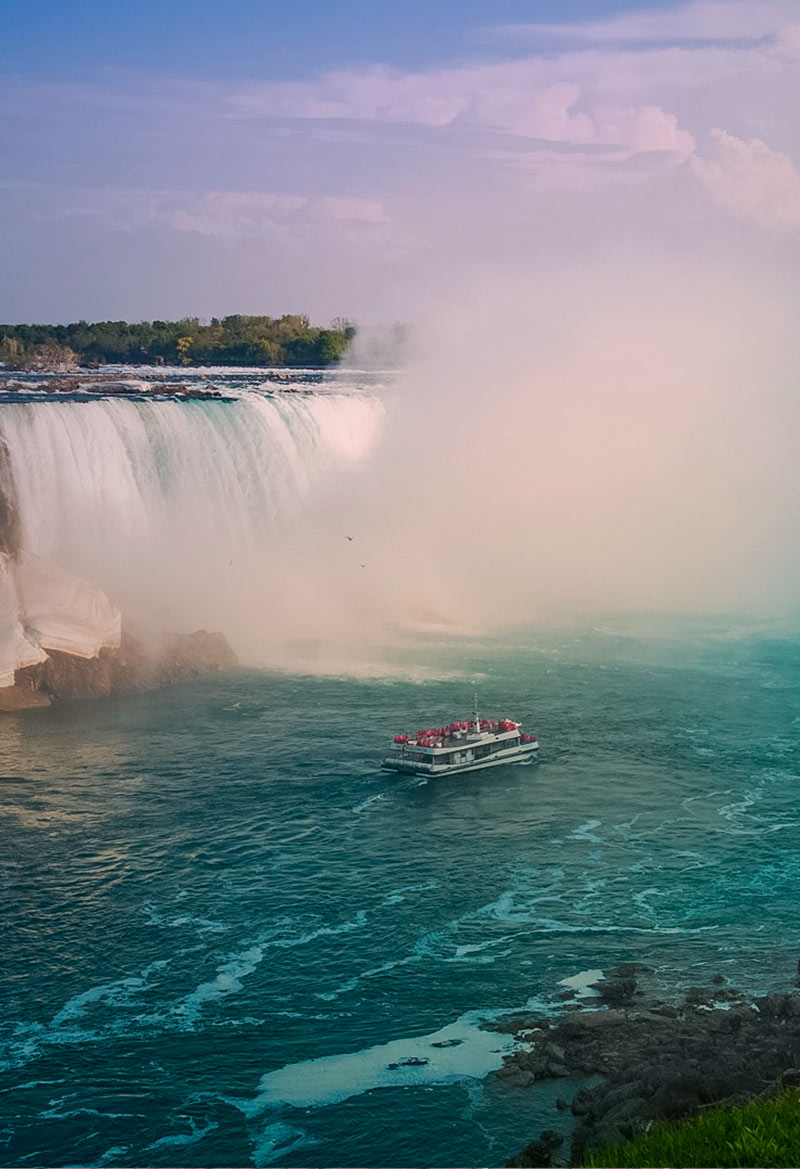 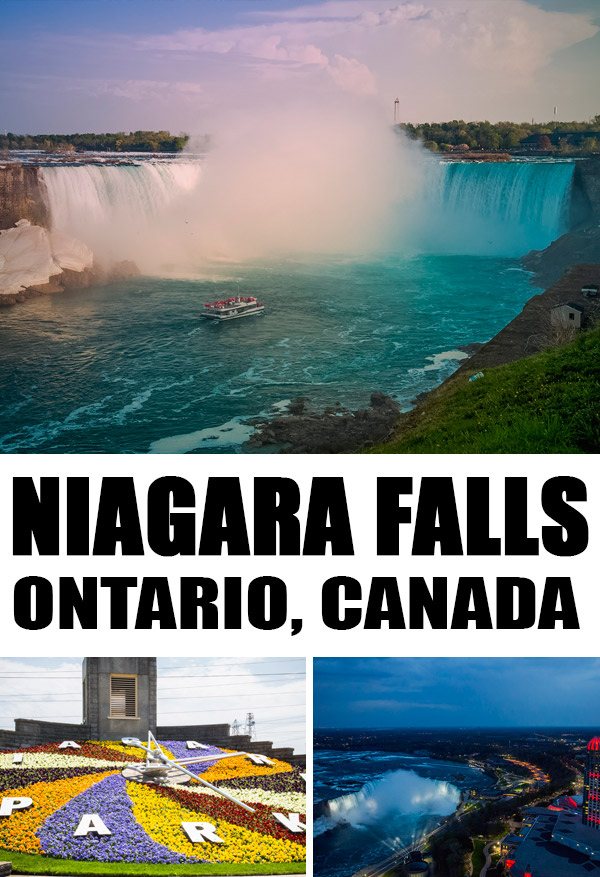