Which adventurer has never dreamed of a road trip along Route 66?

If one day out of curiosity you search on a map where Route 66 is located, you may think your map is outdated. On the internet, websites and apps may even suggest “route 66” when you start typing, but when you click on some options you realize that 90% of the times you end up in places where roads and avenues have different names. The map may even show locations far away from the freeway and you also won’t understand why.

Route 66 as it used to be doesn’t exist anymore. It officially ceased to exist in the 80s when the US created the Interstate Highway System (easily identifiable by the “I” in front of the road name, like the I-10 – connecting California to Florida – and the I-40 – from California to North Carolina). That’s because the original Route 66 had only 2 lanes and was not the fastest way to link central America to the west coast.

But at that time, Route 66’s fame was already established. Cinema and literature have immortalized the road which between the 30s and 60s facilitated the mass migration from Illinois to California. Just remember that the US was recovering from the Depression of 1929. Unemployment was very high and the agricultural conditions within the country were not the best. Many families decided to quit everything and start a new life on the West Coast.

After this, in the 50s, the reasons were different: the search for freedom. For the young adults, nothing more adventurous than escape the cold weather in the North and the conservative society in the interior of the United States and live life in a perfect scenario of sun, beach and warm weather almost the entire year.

Route 66 was the only road that made this trip possible and was the first paved interstate highway in the country. Some advertising also helped. Soon after its creation, the “U.S. Highway 66 Association” was also born. And this entity did a great job promoting tourism along the road. As a result several towns and businesses popped up, which grew together with the mother road in the following years.

Today the vast majority of these places no longer exist. They went bankrupt because of the new highways. And therefore when you drive along this road sometimes you find places worth of Old West movies: the old gas station, the little shop, the restaurant with the whole 50s architecture well preserved etc.

For me, the interest on Route 66 was born when I discovered that the road was named exactly on my date of birth in 1926: a beautiful April 30th (lol). And the curiosity grew when I lived in Los Angeles, after one day I suddenly saw signs in Santa Monica indicating that I was on Historic Route 66. How come? I thought at the time. I had never imagined that one day I would be so close… 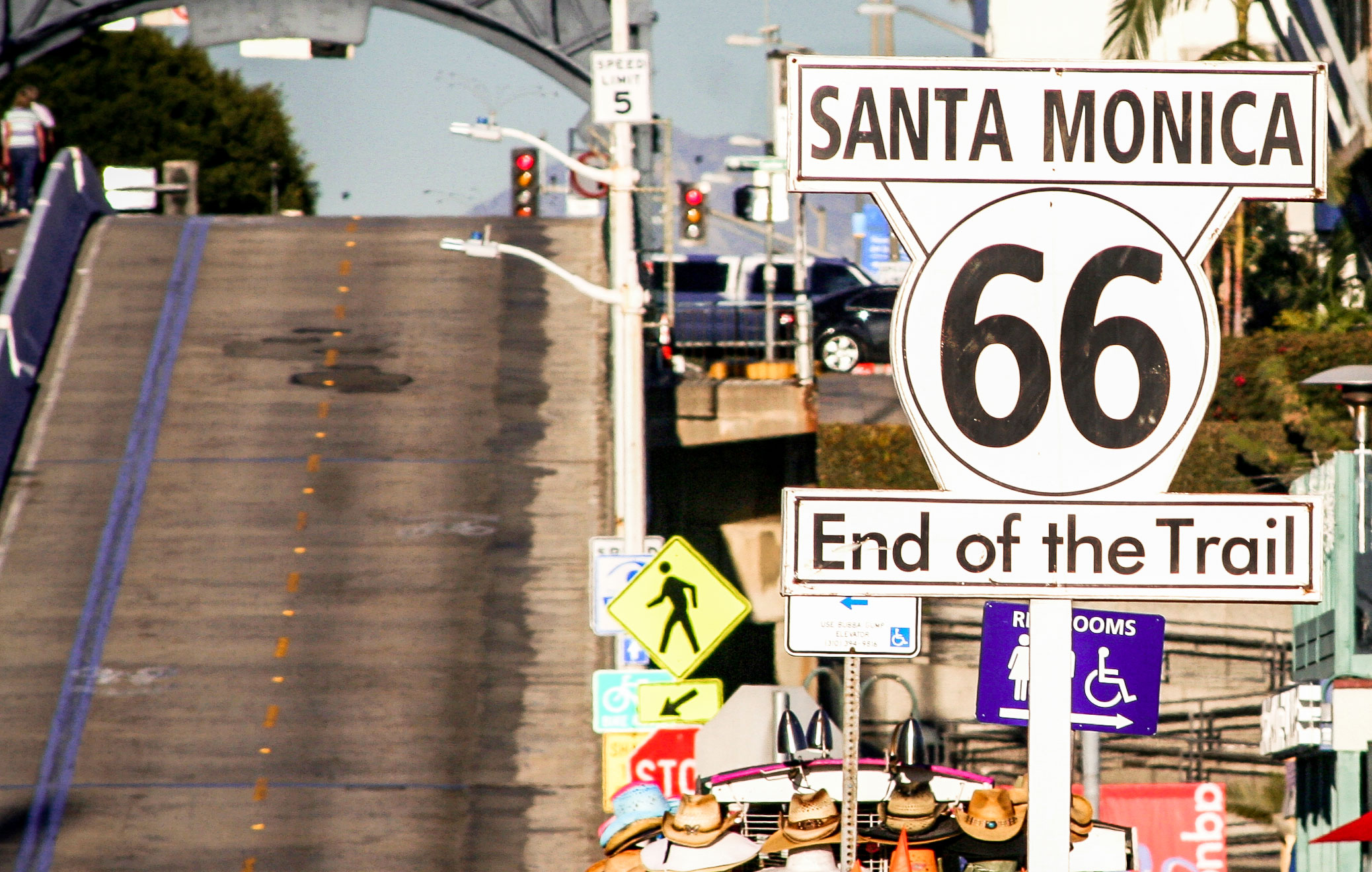 Since then, I drove through large portions of the road 4 times, crossing the states of California, Arizona, New Mexico and Oklahoma. To complete the entire drive you must still go through northern Texas, Kansas, Missouri and Illinois. But you don’t need to go all the way to understand the importance of Route 66 to Americans and what it meant historically, even with regards to the automobile culture here.

What to Do and See along Route 66

If you really want to follow the old Route 66, in various parts you will need to leave the highway and continue in secondary two-way roads. In other areas, it is worth leaving the main road to explore nearby places such as Meteor Crater (an open crater created by a meteorite crash some 50,000 years ago), Flagstaff (the whole town is really cute) and of course the Grand Canyon! They are all located in Arizona, which by the way is considered by some the part with the most beautiful landscapes. Aside from the Grand Canyon, I show some of the attractions in this video from one of my road trips:

Other historic places (and even funny) worth a stop are:

Add to the list the locations where the road begins and ends:

Along the entire road you see signs showing “66” or “Historic Route 66” in addition to several shops selling souvenirs. Here is the complete list of attractions. 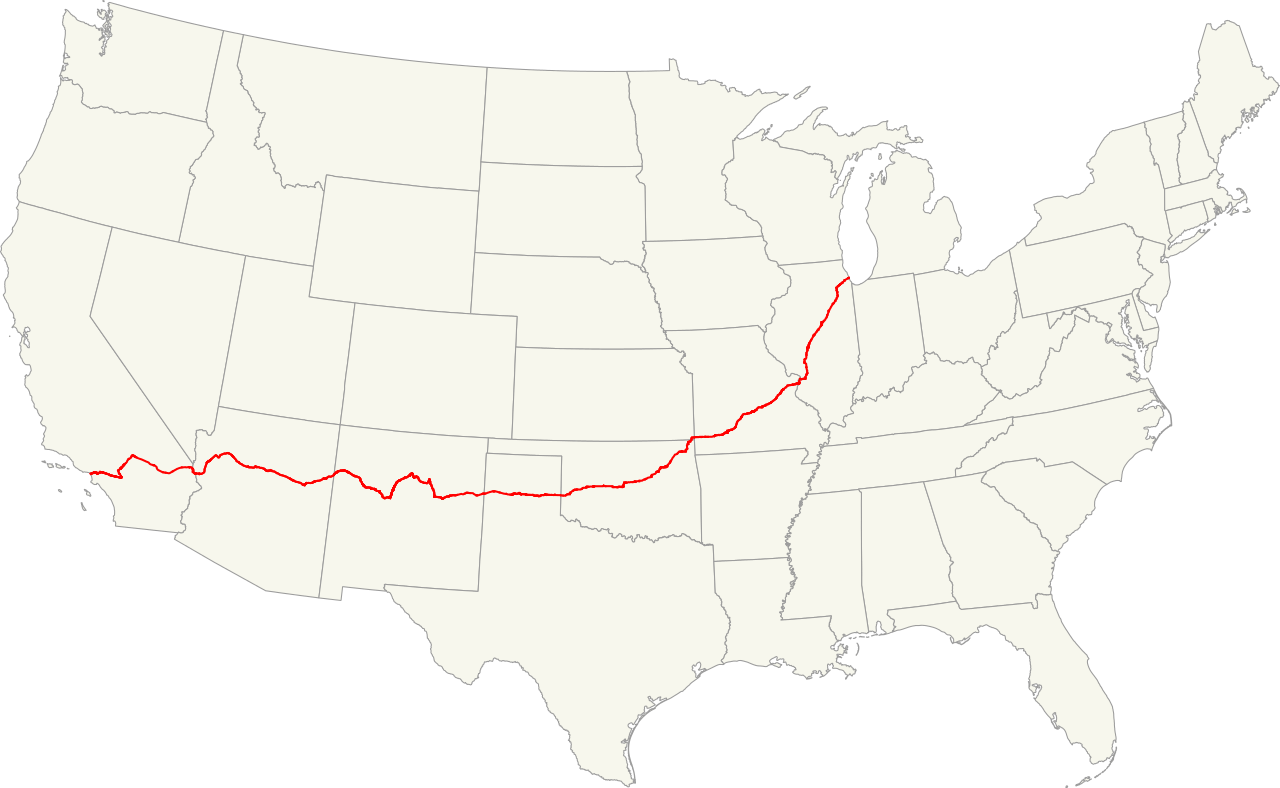 Today interest in Route 66 is growing by the day. There are travel agencies coming up with specialized tours, making it really easy to embark on a journey even on a Harley Davidson. The average recommended time for the trip is about 8 days, as this way you can stop whenever you want without having to worry about time and the distance still ahead (remember that the road is not duplicated in several parts and in others it can be curvy) . But it’s not difficult to drive on your own if you choose so, as there’s good signage along the entire route (there are also indications where to get in and out of the main highways), and several signs refer to the nearby attractions. In addition, if you just keep your eyes open you will inevitably see historic buildings and signs.

But when you start making plans, opt for a road trip either during fall or spring. Winter is too cold, with a lot of snow north of Texas (and I say this for the various foreigners who may not be very familiar with weather in the USA). Summer though is too hot, which can take away the pleasure of stopping and getting out of the A/C (without even considering you might actually be on a bike…).

Officially Route 66 may no longer exist (that’s why you always see the word “historic” in front of it). But Americans have no intention of letting the myth die. And neither do I.