Here’s a detailed guide to the top things to do in Toronto when you don’t have a lot of time.

We arrived in Toronto by car, coming from eastern New York state and crossing the border between the USA and Canada in Buffalo. After a few days enjoying Niagara Falls, we headed north towards the biggest city in Canada. The drive itself is a very interesting experience as you can clearly see how roads, landscapes, and the culture in general change once you clear customs. Northern U.S. is mostly sparsely populated while Southern Canada is booming with life. And that becomes even more evident when you reach Toronto.

The city is located in a densely populated area known as the Golden Horseshoe, in the west end of Lake Ontario, which is home to more than 8.6 million people. This represents 26% of the entire population of Canada. Toronto itself accounts for a third of that. On the streets here you will probably hear more languages than in any other metropolis in the world. This is a city of immigrants. So much so that 50% of the people in town were not even born in Canada! And everybody perfectly coexists. They also bring a little bit of their original cultures, transforming this region into one of the most vibrant and eclectic parts of the country.

Here’s what we did in this first day:

We arrived for a short 2-day stay. At the same time, I wanted to enjoy the most well-known attractions, I was eager to also visit the various neighborhoods and get to know the city almost as well as a local. I did a lot of research in advance to the point I almost knew the city map by heart.

We stayed in North York, one of the most diverse areas of Toronto. It used to be a separate municipality (with more than 600,000 people) but it now belongs to the city of Toronto. We enjoyed North York only for breakfast though, as all the places you want to visit are located in the South, close to Lake Ontario. The great advantage of that area is that hotels are more affordable and you don’t need to worry about driving. You can catch the subway, connect to the buses if needed or simply walk from one attraction to the next. One single day pass for CAD 11.50, no traffic jams and no expensive parking lots! 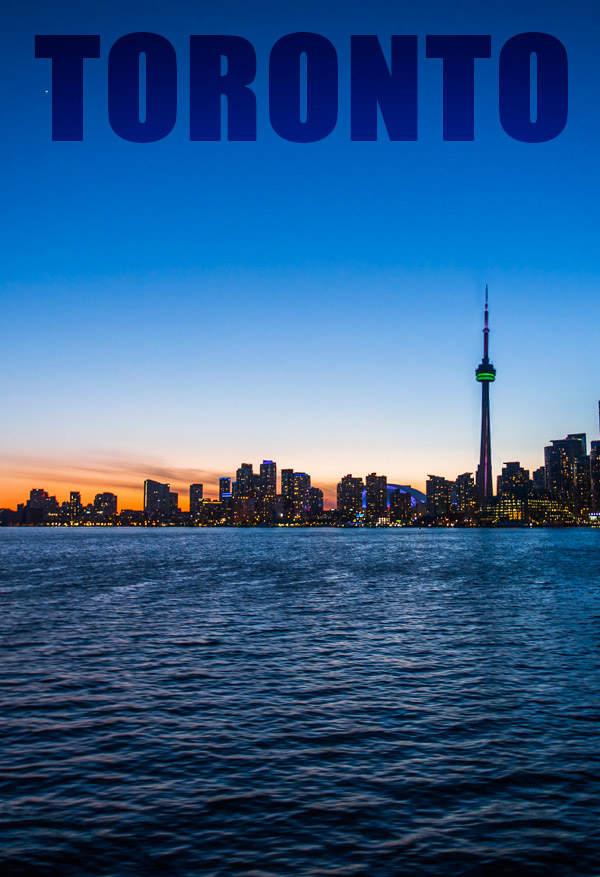 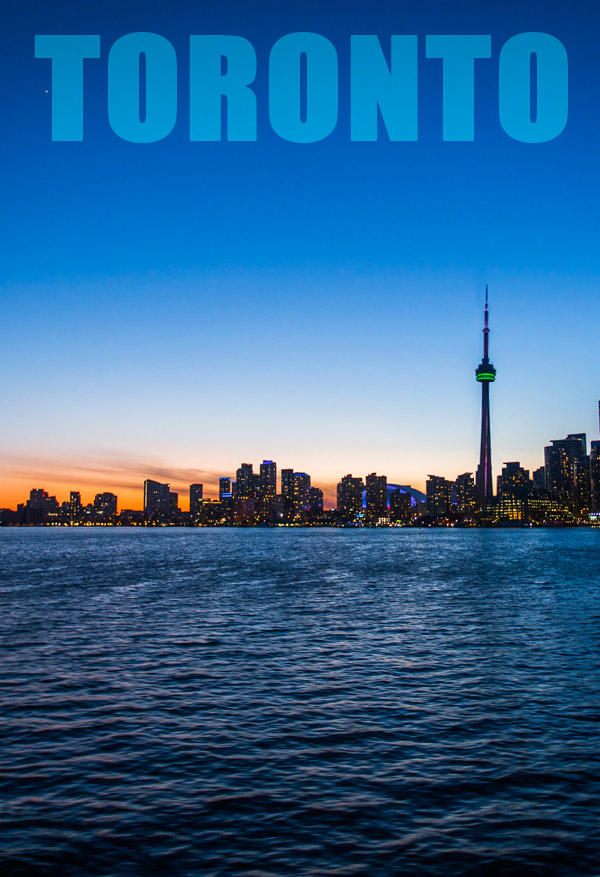 A morning enjoying the Historic Downtown

We dedicated the first day to explore the various areas downtown. The urban history of Toronto dates back to 1793, and a lot of old buildings were fully refurbished and are very well preserved. They obviously contrast with the modern architecture, but this is one of the characteristics I enjoyed most.

We left the subway at King Station, ready to walk from the Old Town to the Distillery Historic District. Not sure I’d start this way again, as the Distillery has a rich nightlife, with a lot of bars, cafes, and restaurants we couldn’t really enjoy in the morning. But it was very interesting to see how the former Gooderham and Worts Distillery (once the largest distiller of alcoholic beverages in the country) area today is one of the most fun communities to live and enjoy life. Actually, this region comprises the largest collection of Victorian-era industrial architecture in North America. 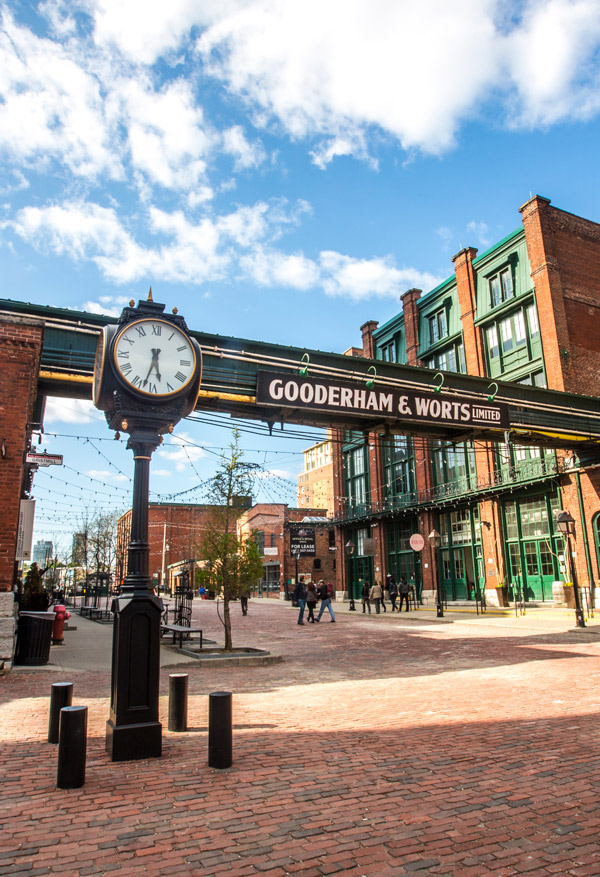 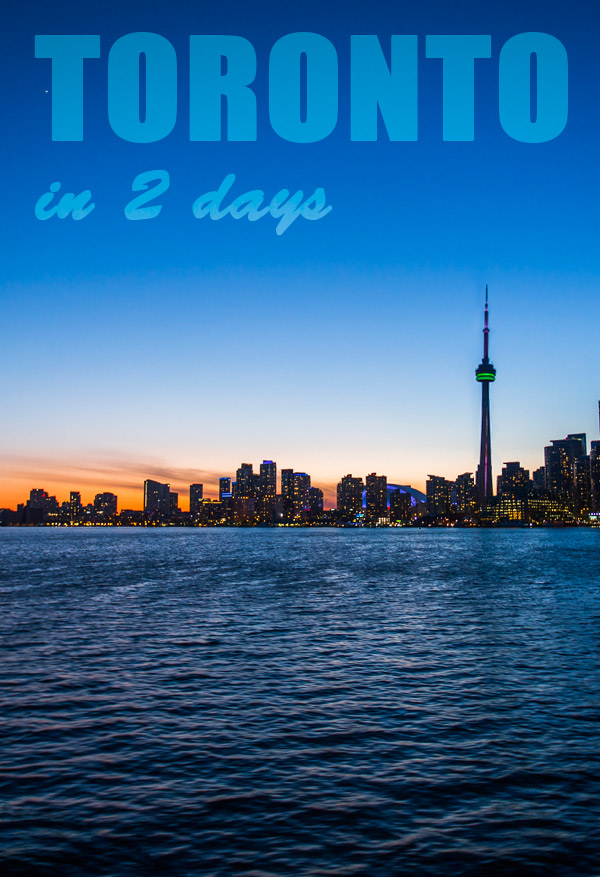 After spending the whole morning walking around and appreciating the architecture, we returned to the Downtown Core. There and in the Financial District you can find some of the best restaurants in town. Eating is something that shouldn’t be a concern in Toronto, as there are dozens of good options (and some even with a gorgeous lake view). We decided trying Bannock because they specialize in Canadian food, and I wanted to finally experience the famous poutine. I love potatoes, so of course, I’d love it! The restaurant was busy, I guess it’s a popular place for lunch downtown. I didn’t identify myself as a journalist (I don’t know they realized we had a camera, as we didn’t shoot much) and we had a very nice experience. The staff was friendly and I enjoyed the food. Prices were reasonable too.

From there, a natural stop was at the Hockey Hall of Fame. Tourism Toronto offered me media passes to visit the attractions in town, which was very kind of them. My husband is Canadian, so of course, he loves ice hockey! He had even visited the place many years ago, and this time almost became a kid again. For hockey lovers, this is a must go place, as they have vintage collections, stories about National Hockey League (NHL) legends and, of course, the Stanley Cup. For those who have no idea of what I’m talking about, this is the trophy awarded annually to the NHL champion. It was a good surprise to see how knowledgeable the staff is about all things hockey. They told me stories about past tournaments and other little bits and pieces that certainly made the visit more interesting. Also, kids absolutely love the interactive area. Even I became a kid for 5 min and played at the “SportsCentre” TV studio (you can see in the video above the part where I’m playing SportsCentre’s anchor). After any interactive experience, you can choose to receive for free via e-mail the video of your performance, which is a great souvenir to keep for yourself or share in social media. 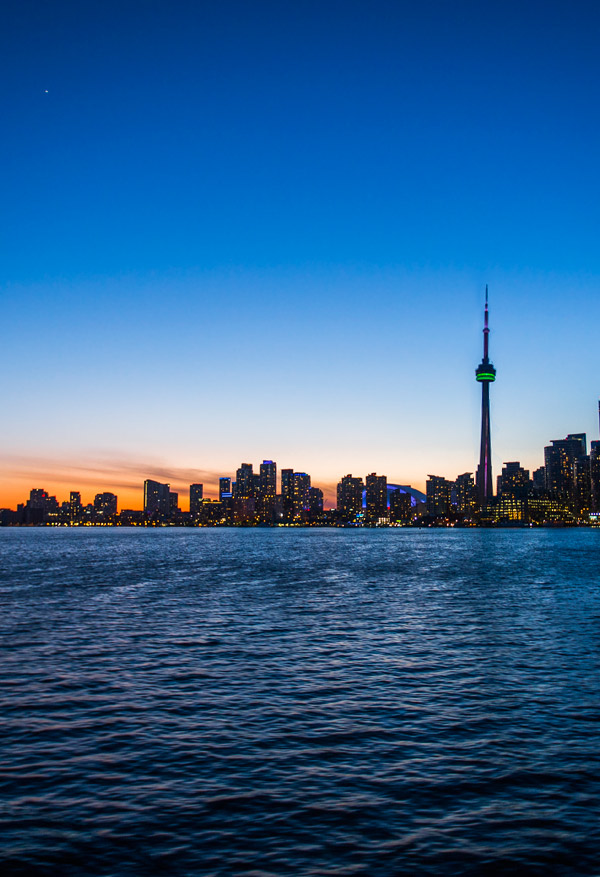 Toronto has several main boulevards which cross the city North to South, East to West, and this makes it very easy to quickly understand where you are and where you want to go. Yonge Street (pronounced “young”) is definitely among the most important ones, as it concentrates several main businesses, the Yonge-University subway line (the core of Toronto’s subway system) and due to its historical importance connecting Toronto to Upper Canada, it’s sometimes referred to as “Main Street Ontario”. Right at the stop at Dundas St, you can find the “Times Square of Toronto”, the Yonge & Dundas square. I immediately associated it with New York’s Times Square because that’s where everything happens in town (in terms of events). There’s always something going on, sometimes there are free concerts, happy hours, etc. It’s a fun place to be. And for “shopaholics”, the Eaton Centre is located just across the street.

Toronto is a city that lives and breaths performing arts and culture in general. The Toronto International Film Festival, for instance, attracts thousands of people from all over the world every September. When I lived in Los Angeles and used to cover Hollywood movies, it was a top event for the entire Hollywood industry. Too bad I was there in May… Still, when you visit the city it’s always a good bet to include cultural options. Several tourist attractions offer seasonal events, which can bring some unique experiences.

In our 2 days, unfortunately, there was nothing special going on. Not a big deal, as there are lots of great museums, theatre plays and art galleries around. From Yonge and Dundas square, we walked some 10 blocks west and arrived at the Art Gallery of Ontario, which displays more than 80,000 artworks (some contemporary, some hundreds of years old). Art lovers will need 2-3 hours to fully explore the gallery, which is one of the largest in North America. Over the years it has hosted some of the world’s most significant exhibitions. If we had more time, I’d have loved to visit the Royal Ontario Museum as well (museum of art, world culture, and natural history) and the Bata Shoe Museum (a footwear museum that probably has some fun facts and figures!). In fact, this was one of the first comments I received when I posted the video on YouTube!

Art Gallery of Ontario (AGO) 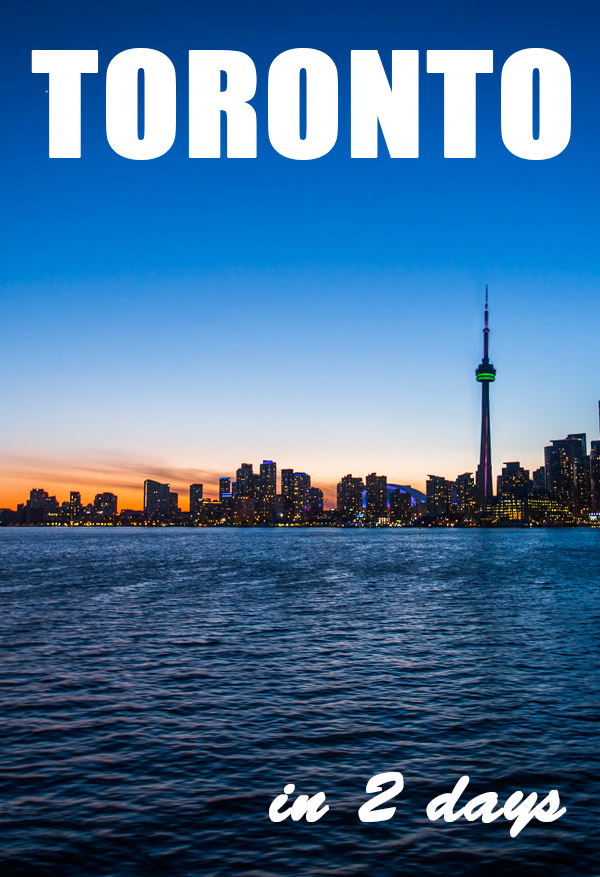 After doing all this on the same day and especially after walking so much, a regular tourist would be very tired, looking forward to bedtime. But with days longer and longer, I convinced my husband to get the ferry to the Toronto islands to see the beautiful sunset behind the city skyline. The decision brought us the amazing pictures you see at the end of the video, but we also almost froze with the cold and the wind. Temperatures considerably dropped as soon as we were offshore, and once you are in the islands there are no other options to return. You have to wait for the next ferry, which at that time took close to 2 hours. You should really plan ahead, as in the Centre Island (where we went) there were no bars or restaurants open. But it was certainly a very fun tour, as 90% of the people in the boat were either professional or amateur photographers. Everybody with the same idea as ours: take pictures of the amazing skyline in a perfectly clear sunset. Those pictures are some of the highlights of our visit.

View from the Toronto Islands 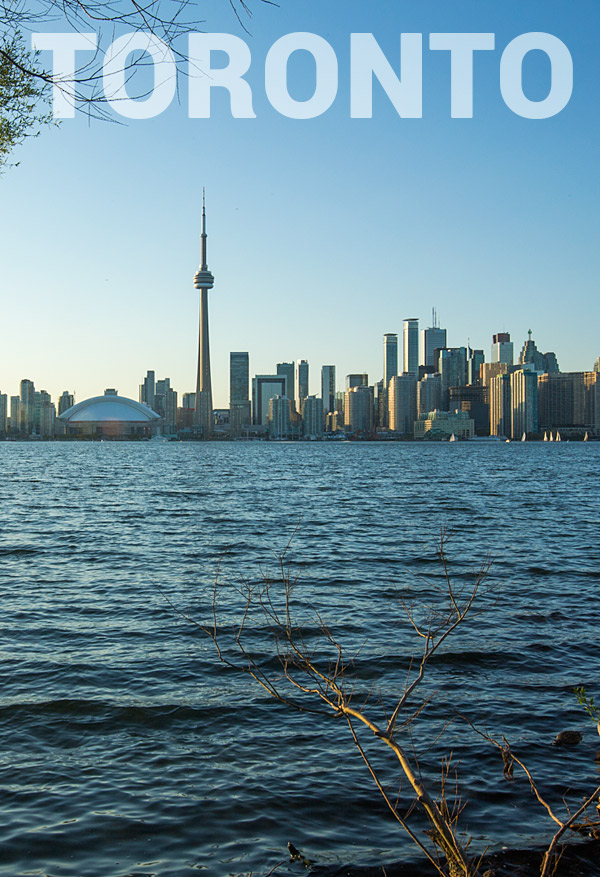 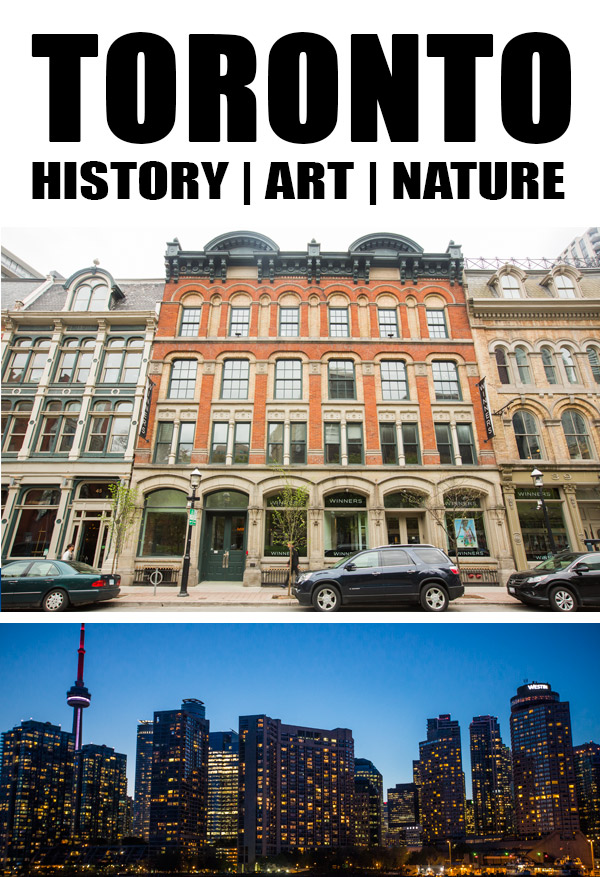 By now you’re probably thinking what’s the downside of Toronto, as I only mentioned great experiences… Well, I already gave a hint above. Weather in Toronto can be cruel. Temperatures can reach -40 C (-40 F) during winter and +40 C (104 F) during summer. During our visit in mid-May, we experienced everything between 7-14 C (44-58 F), but the chilly winds sometimes made me think it was way below freezing. The city can cope well with both seasons though. They have an underground system called “Path”, which expands over 18 miles (30 km) linking the subway to several buildings downtown. I have a friend in town who doesn’t even walk outdoors, as her apartment is connected to the subway and her workplace is connected to the Path. No need to carry heavy winter jackets… I like it!

Well, the first day was enough to get familiar with the city and its flow, so we used our second day to have some fun visiting other main attractions, like the CN Tower and Casa Loma. The decision was also based on weather, as it was cloudy for most of the first day (as you can see in the video), and the forecast was for sun only from 7 pm on. That’s why we got a great sunset. It totally paid off, as in the second day we had amazing views from the top of the Tower. 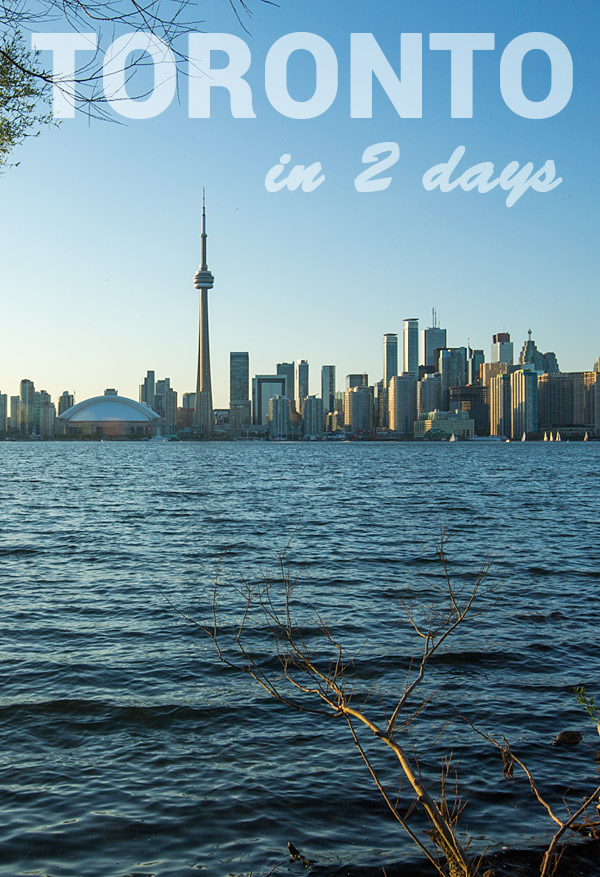 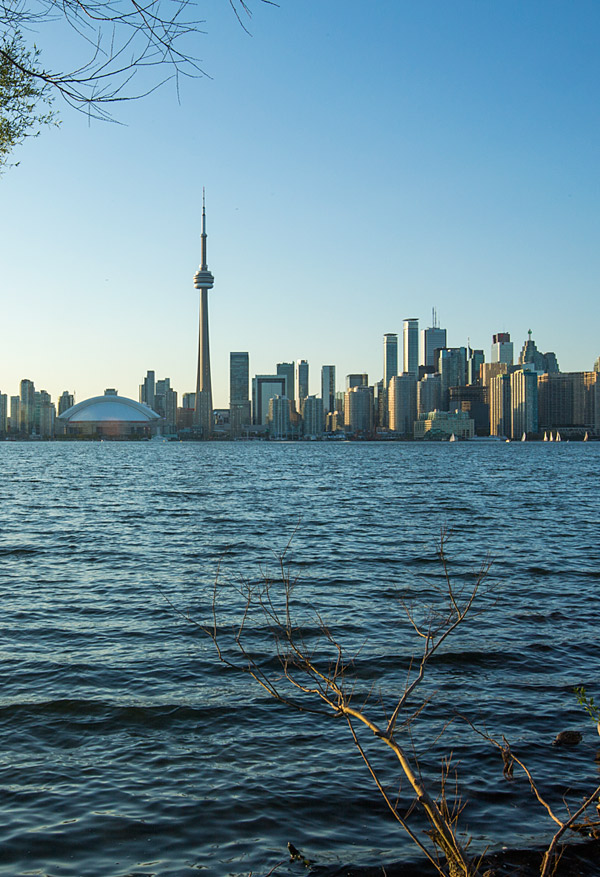 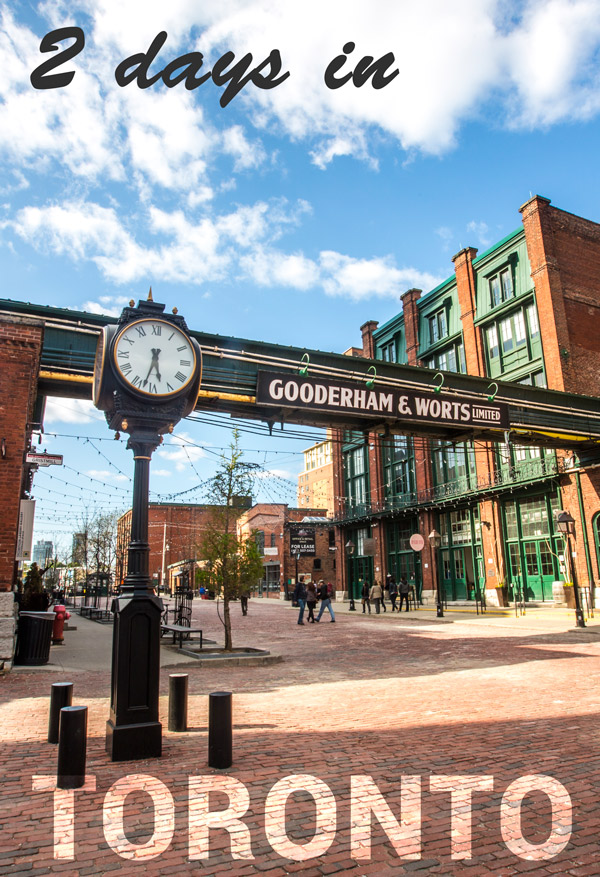 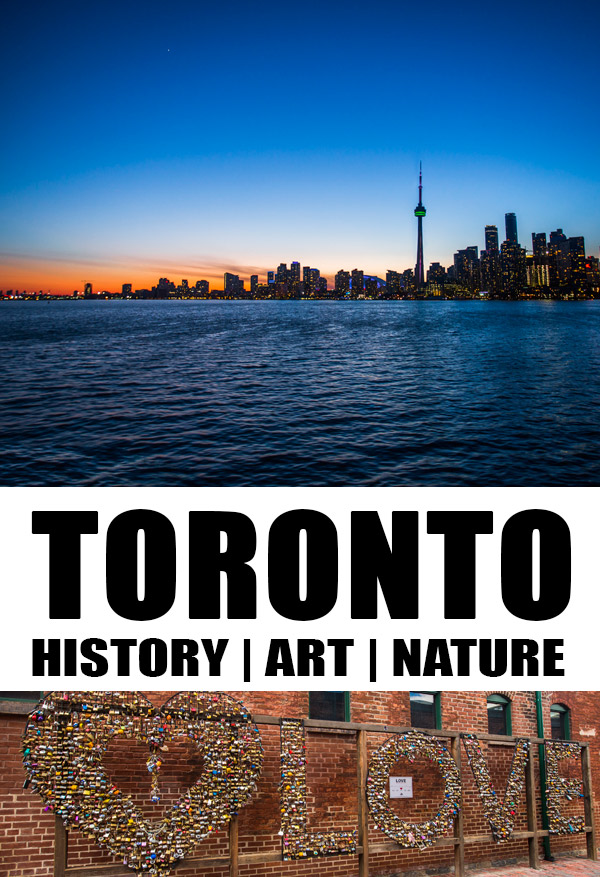 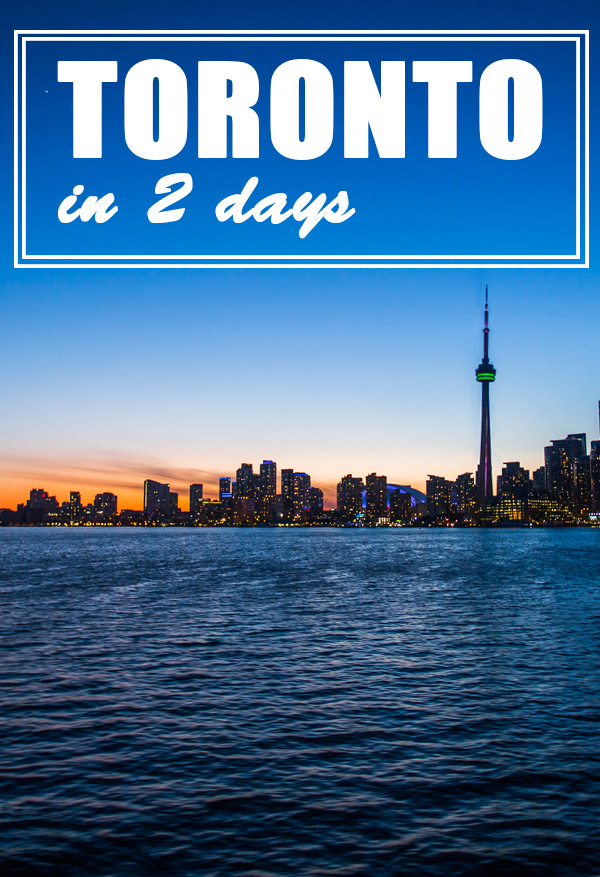 P.S.: As a journalist, my coverage was coordinated with Tourism Toronto, which kindly facilitated my entrance at the attractions in town. As always, all opinions here are my own