Cowboy hats, boots and large belt buckles are common accessories at this Austin bar. James M White, the owner, declares it “last of the True Texas dance halls”, welcome to the Broken Spoke!

AUSTIN, TEXAS, USA
Austin is the capital of the state of Texas

What is Broken Spoke?

We were received by the owner himself, who agreed to allow our cameras to roll and introduced the family, who run the place. With the highest honor, we’re asked to roll the wheel, a tradition and symbol of the establishment. So here we are – in the spotlight – while Mr. White himself greets the crowd and sings. Yes, at 77 he maintains the same energy as a 20-year-old.

Originally located 1 mile south of the Austin city limits, Broken Spoke today is surrounded by the buildings of a city on the rise. South Lamar Blvd, it’s one and only location, with its trendy shops and new condos, is just an 8-minute drive from downtown. Close enough an Austinite could even consider part of downtown.

Voted Best Country Music Club several years in the past, it’s the place for live country music. Names to grace its stage over the years include Willie Nelson, still a regular, George Strait, Tex Ritter and most recently, Garth Brooks. Regular performers see the likes of Dale Watson, Derailers and Weldon Henson.

Dance Lessons at the Broken Spoke

It’s easy to get carried away with nostalgia, gazing at the celebrity photos, getting caught in the tourist trap (store) but we came to learn country dancing, Texas style.
Terri White, one of James White’s kids, leads the class. They occur Wednesdays through Saturdays, 8:30-9:30 pm, cost $20 and you better come early as they fill up fast.

You learn the traditional two-step and western swing. Our group was a mix of couples and individuals, mostly women. No need for a date to join, but ideally, come in pairs to be able to practice with.

After lessons, the dance floor opens up. Gentlemen politely ask ladies for a twirl and no need to know the steps, they can lead.
There are also lots of regulars who enjoy a few evenings per week or month hitting the floor. You can tell who’s been doing this for more than a couple of hours.

Beyond the Country Dancing

If locations like this defined Texas, it’s not very common anymore. So while visiting the city, come visit this traditional American honky-tonk. See the room full of photos and memorabilia with the likes of Willie Nelson, Ernest Tubb & Bob Wills playing on stage. There are lots of items belonging to celebrities a die-hard country fan could spend an hour looking over.

If you’re hungry, try come on by for the famous chicken fried steak and the burgers. Oh, they serve food too. The kitchen is open for daily lunch and closes at 11 pm.
Overall we had a perfect time. My friend Luciana (from the video) also wrote about the experience on her travel blog Colagem (in Portuguese).

James White doesn’t show up every day anymore, but when he does, he makes sure to greet the guests and talks to as many people as he can. He certainly has celebrity status in the Texas honky-tonk scene. 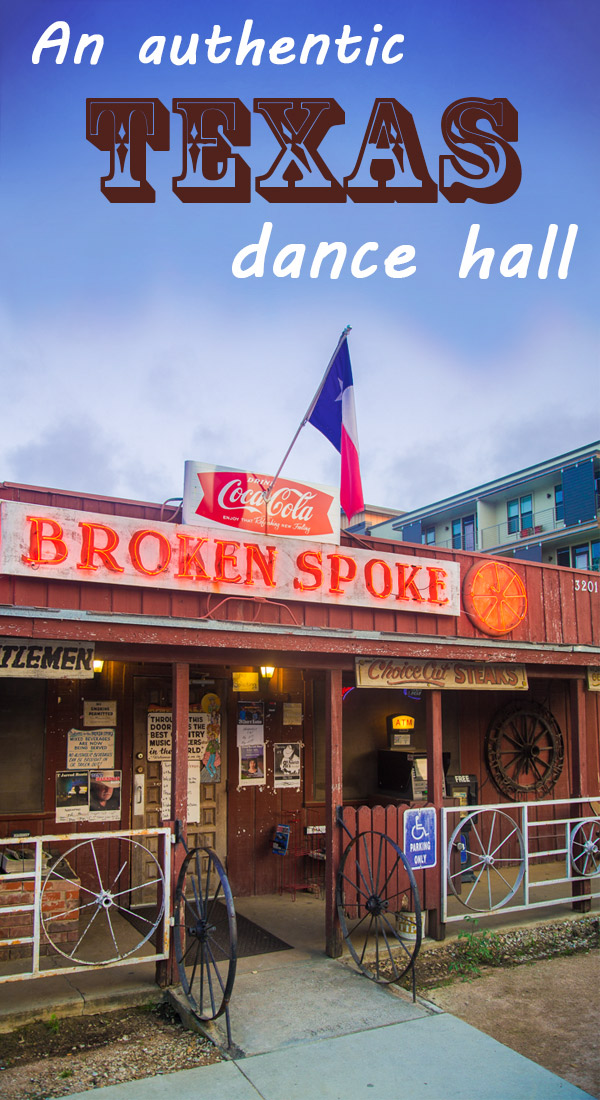 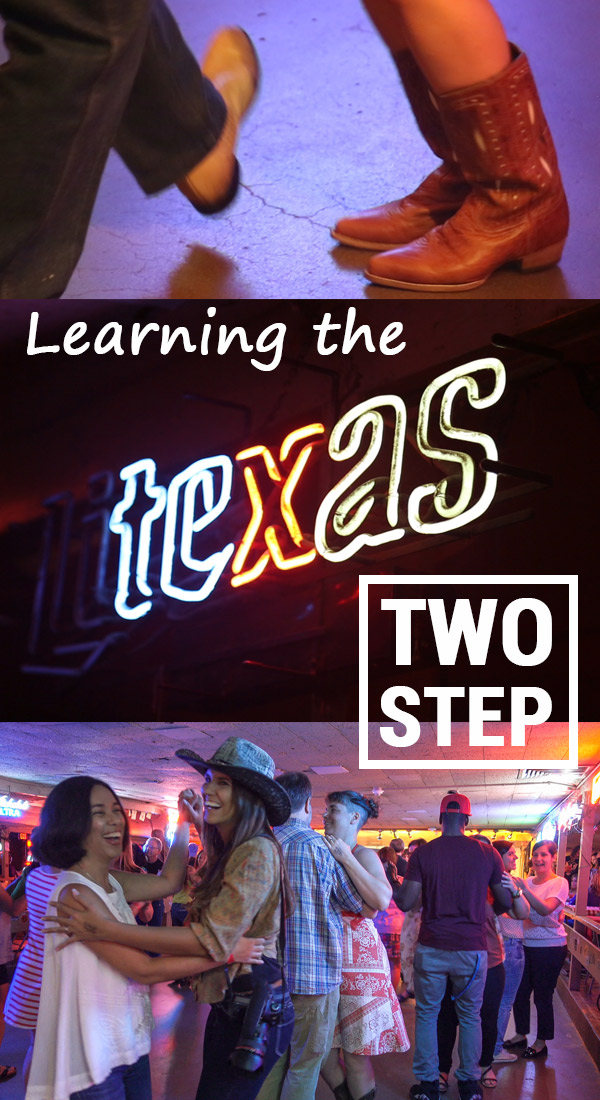 Cheers and all the best,

Note: This story is in no way sponsored by the Broken Spoke. To the contrary. We even paid the $20 for the dance class. 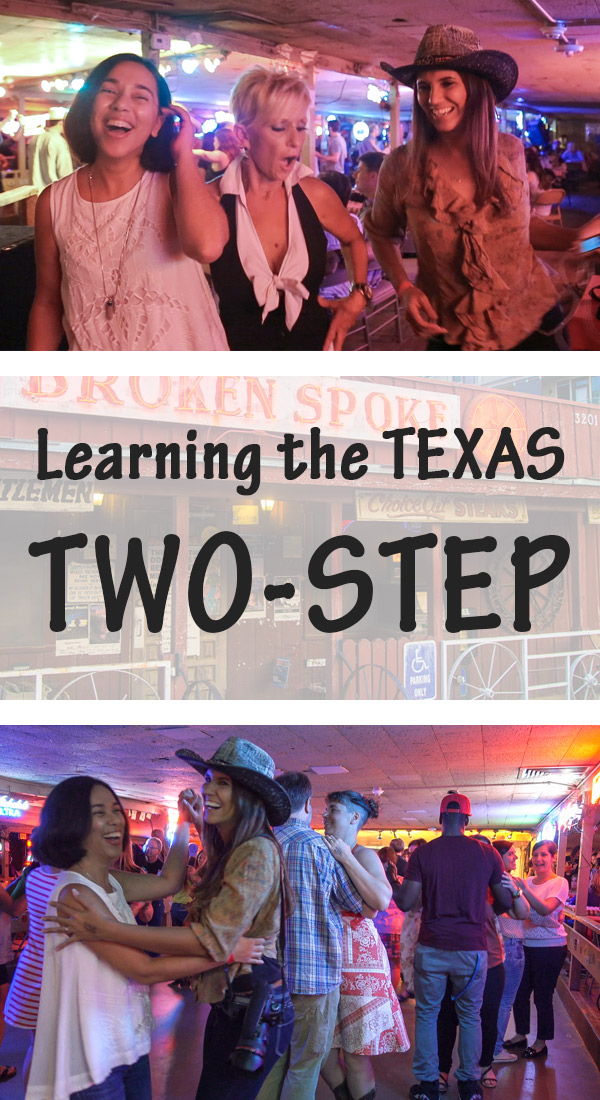 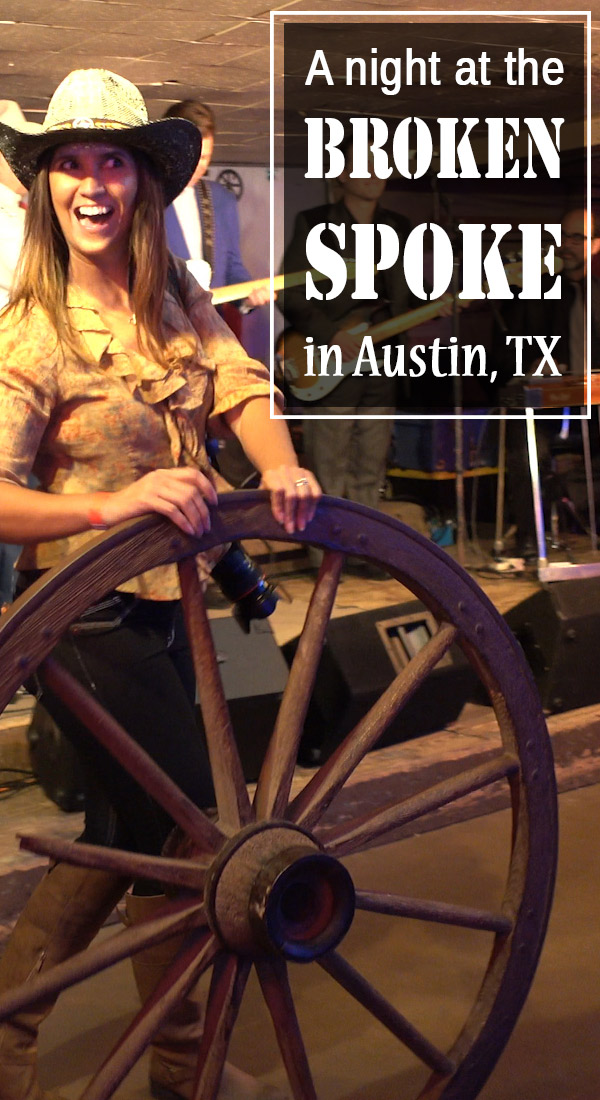